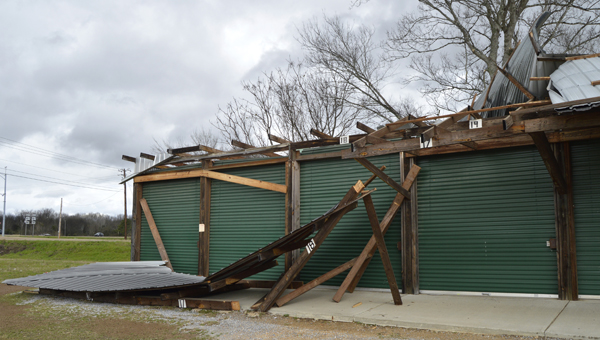 Booths at The Selma Flea Market were damaged in Tuesday night’s storms.

The Selma Flea Market on River Road was damaged in Tuesday night’s storms.

“It was probably straight-line winds,” said manager Sherry Maluda. “It does that.”

The booths belong to a show vendor from Prattville. Maluda said the building is covered by insurance, but individual vendors are responsible for their own merchandise.

In addition to strong winds, some places in Selma reported more than five inches of rain between Monday and Tuesday.

Emergency Management Agency director Toya Stiles said no other damage was reported in the storms.

However, the rest of the state was not as fortunate.

Debris littered dozens of roads and officials said about 100 homes were damaged in Dothan, where school was canceled Wednesday to allow for cleanup and power restoration. Roofs were ripped off homes around Rehobeth and Headland, also located in southeast Alabama, officials said.

National Weather Service teams were assessing the damage in southeast Alabama to determine whether a tornado was responsible, and they said weak twisters hit two northwest Alabama counties.

Alabama Power Company said as many as 14,000 customers were without power at the height of the storm, with the largest number — about 5,000 — around Birmingham. Crews were working to repair the damage.

Several buildings in downtown Dothan had minor damage from flooding, and as many as 40 roads were blocked by trees and power lines, officials said.

Henry County Sheriff William Maddox told the Dothan Eagle that the situation could have been much worse.

“The main thing was nobody was injured and there were not houses completely destroyed,” he said. “We kind of dodged a bullet.”

Damage also was reported in northwestern Alabama near Hackleburg and in west Alabama in Pickens County, where a weather service assessment determined two weak tornadoes struck.

Ronald Driver said the Pickens County storm blew the roof off his shed while he was inside it.

“All at once I just hear a heck of a roar and when I looked, it was a funnel cloud,” he told WBRC-TV. “And it just hit down on us all at once … and I didn’t even have time, none of us, to get to the storm pit.”

No serious injuries were reported in Alabama, but storms killed at least three in Louisiana and Mississippi.