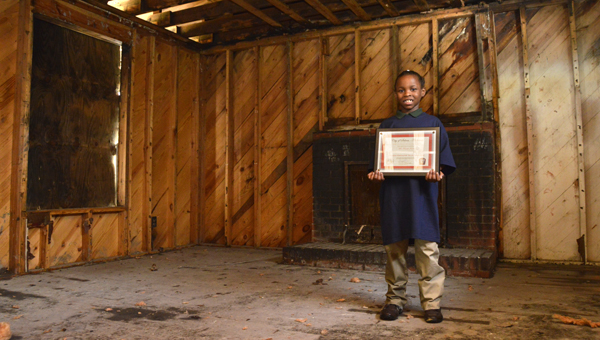 amyah Johnson stands in her family’s burned out living room. The 8-year-old woke her mother and saved her two siblings from a Feb. 22.

An 8-year-old Edgewood Elementary School student was honored Wednesday for her bravery in saving her family from a recent house fire.

Tamyah Johnson was awarded a Certificate of Excellence and named a honorary firefighter for her heroic actions.

“She just woke me up and said, ‘Momma, the house is on fire,’” said Tiffany Johnson, Tamyah’s mother. “She wasn’t scared, she wasn’t crying. She’s a special child.”

The fire occurred in the early morning hours of Monday, Feb. 22. Tiffany said about 3 a.m. Tamyah work her up and alerted her to the fire.

“We would have been dead,” Tiffany said. “If she had not got up, we wouldn’t have made it.” 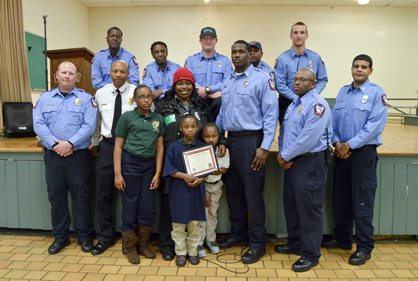 Tamyah Johnson, 8, poses for a photo Wednesday with her family and members of the Selma Fire Department.

Tiffany said she is a heavy sleeper and her other two children were asleep in their room with the door shut. Tamyah often wakes up during the night to go into her mother’s room. That’s when she discovered the fire in the living room.

After waking up her mother and siblings, Tamyah dialed 911.

The fire is believed to have been caused by an old heater near a couch.

The living room was completely destroyed by the flames and has since been stripped down to the posts for repairs. The rest of the home suffers from severe smoke damage.

Soot covered the ceiling and about three feet down the walls. Even the dish detergent in the kitchen had turned completely black from the smoke.

The family is staying in a nearby hotel while they recover and rebuild their lives. Tiffany said it will probably be a few months before they can move back in their home.

Battalion Chief James Murphy spoke to the 200 students and teachers in attendance before calling Tamyah up for her award.

“I’m very proud because she allowed us to realize that everything we come to your school and talk to you about, that you all pay attention and that you all do it well,” he said.

Every October the fire department visits the local schools and teaches them about fire prevention and safety.

“We can’t say enough how proud we are of her. She went above and beyond and is something you can’t put in words,” Murphy said. “This young lady, she’s my hero because she saved the life of her mother, brother and sister because she paid attention to everything we taught her and that’s priceless.”

Tamyah said she knew how to act because of what the firemen had taught her.

Tamyah was proud of her award, “It means I’m a firefighter.”