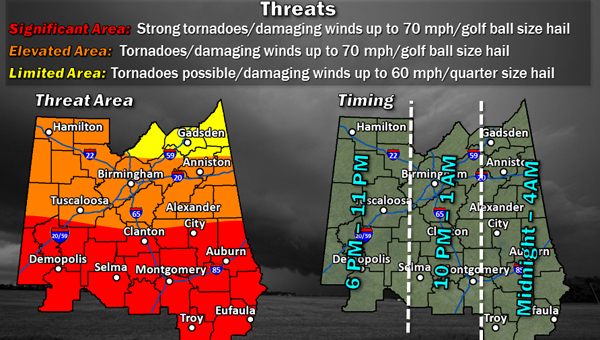 This graphic from the National Weather Service in Birmingham shows weather threats and timing.

Dallas County is still under a tornado watch, but the watch has been cancelled for Perry County. As of 9:45 p.m., Dallas County and surrounding counties are no longer under a severe thunderstorm warning.

Gov. Robert Bentley issued a statewide State of Emergency Tuesday in anticipation of the severe weather that is headed toward Alabama.

“I was briefed on the severe weather by Alabama Emergency Management Agency Director Art Faulkner this afternoon, and based on the evidence from the National Weather Service, it is necessary to issue this state of emergency to ensure state resources are available and can be deployed in a timely manner, if necessary,” Bentley said.

A broken line of storms along a cold front will quickly push eastward during the overnight hours with the possibility of severe storms forming out ahead of that line. Those storms will have the potential to be severe, with tornadoes, damaging winds and large hail all possible.

The main window of severe weather for Selma and Dallas County has been pushed back to 10 p.m. to 1 a.m. Check back for updates as the day unfolds.

Below is a running list of closings and delays due to weather concerns.

BASKETBALL: The 1A Central Regional championship games, which both feature Keith teams, have been postponed until Thursday. The Keith girls will now play Loachapoka Thursday at 4 p.m. and the Keith boys will play Cornerstone Thursday at 5:45 p.m. Both games will be at Alabama State University.

A Selma nonprofit would like to renovate and reopen what used to be the Brown YMCA. The Circle of Love... read more