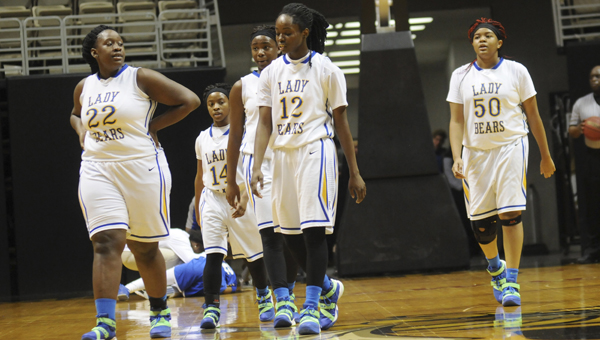 The Keith girls walk off the court during a timeout during their win last week. Keith had its games Tuesday postponed until Thursday due to severe weather. –Daniel Evans

The Keith basketball teams loaded the bus Tuesday afternoon just a pair of wins from making a trip to Birmingham for the Alabama High School Athletic Association state finals. Before the Bears could even get to Montgomery, they had to turn around.

Mother Nature was the only winner in the 1A bracket Tuesday.

With severe weather on its way, the AHSAA postponed both 1A Central Regional championship games until Thursday. The Keith girls will now play Loachapoka Thursday at 4 p.m. and the Keith boys will play Cornerstone Thursday at 5:45 p.m. Both games will be at Alabama State University.

The team received notice of the game’s postponement as it got near Bruce K. Craig Elementary School, which is about 30 minutes from Keith. Keith boys head coach Tommy Tisdale said his team was disappointed when the bus had to turn around.

“When you prepare for these types of games, there is a certain mental level you need to be at,” Tisdale said. “I think a lot of them were either there or headed in that direction where they were amped up and ready to get this thing on the road.”

Tisdale said the school had received an email from the Alabama High School Athletic Association Monday afternoon discussing the possibility of severe storms.

In the email, the AHSAA noted that Alabama State University’s Dunn-Oliver Acadome was a storm shelter and would be a safe environment for teams, but that they should plan to be at ASU late into the night due to the storms coming through.

The AHSAA also asked the school to leave early Tuesday, which the teams did. Tisdale said once the Bears took the bus, he figured the game would go on as planned.

Instead, he received confirmation that the game was postponed.

Tisdale said the AHSAA definitely made the right call though, considering the storms that impacted the state Tuesday evening.

Neither the Keith boys or girls held a normal practice Tuesday evening. Both coaches wanted to give the players a break after they had gotten themselves mentally ready to play.

“The storm always comes before the sunshine,” said Keith girls’ head coach Cecil Williams.“We are going to get the rain out of the way and now we will be there Thursday.”

The Keith girls had their championship game delayed in Birmingham last year due to wintry weather, so this is nothing new for the Bears.

One positive part of the postponement is that more students will likely be attending the games on Thursday. The boys game on Tuesday would’ve likely until after 10 p.m., but that won’t be the case Thursday.

“Now we get to another opportunity to fill as many buses as we can,” Tisdale said.

The Keith girls and boys have weathered the storm from eight teams remaining in the class 1A tournament to five,... read more