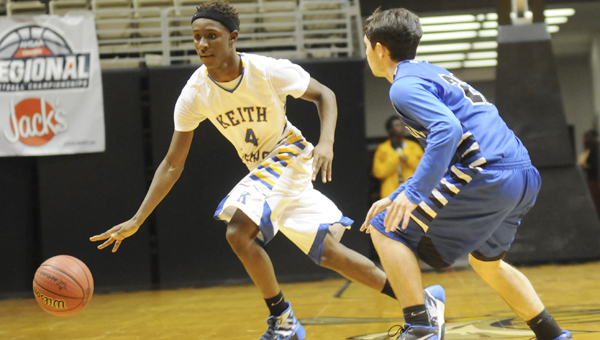 ORRVILLE — On Tuesday, the Keith girls and boys will tip off at around the same time they do during the regular season. The times may be the same, but the stakes are much higher.

Even in the regional finals in Montgomery, Keith’s girls and boys are preparing their gameday schedule as if it were a regular season game on their home court.

“We’re going to eat the pregame meal at the same time. We’re going to do a lot of things that are kids are used to doing,” said Keith boys head coach Tommy Tisdale. “That in itself is a tremendous plus.”

After winning their respective area tournaments and advancing in the sub-regional and regional semifinal rounds, Keith’s boys’ and girls’ teams are the only teams remaining in the Selma-Dallas County area with chances of winning a state championship. Only one game stands between each Keith team and a trip to the state tournament in Birmingham.

Keith’s girls will play Loachapoka Tuesday at 6:30 p.m. and Keith’s boys will face Cornerstone Christian Tuesday at 8:15 p.m. Both games will be played at the Dunn-Oliver Acadome at Alabama State University.

The Keith girls are three games away from repeating as class 1A state champions, but they’re facing the team that finished just below them in the Alabama Sports Writers Association poll in No. 2 Loachapoka.

Keith girls head coach Cecil Williams is confident his players are at a better spot than they were last time around. He also said he believes Loachapoka, who has become a common opponent for Keith at this time of the year, isn’t at the same level as what he’s seen in the past.

“They’re not as strong as they were last year, so our biggest thing is keeping our composure and hoping we don’t make as many mistakes as them,” Williams said.

Williams said his players are not worried about having a target on their back because it’s been there all season.

“It’s made us more confident in what we have to do because we’ve been there,” Williams said. “We have that experience.”

To reach the regional finals, Loachapoka edged Westminster-Oak Mountain 42-40 in the sub-regional round and then took down Autaugaville 58-33 in the regional semifinals.

The Keith girls haven’t been slowed down at all this postseason. In the sub-regional round, the Bears rolled past Billingsley 69-21, and in the regional semifinals, Keith defeated Notasulga 50-30.

Williams is confident his team is ready for a repeat performance in the homestretch of the postseason, but this year, Tisdale wants his team to join the girls in Birmingham.

Both Tisdale and Williams said having the other team there to support and motivate each other helped each team play their best.

The Keith boys have made the most of their postseason matchups thus far. In the sub-regional round, the Bears dispatched Maplesville 73-48. On Thursday in Montgomery, Keith took down Jefferson Christian 69-25.

Tisdale said even he couldn’t have predicted that dominant of a performance from his team in the regional semifinals, but he still believes his players can still improve.

Cornerstone Christian’s road to the regional finals hasn’t been as easy, with a 67-66 win over Notasulga in the sub-regional round and a 56-52 victory over Autaugaville in the regional semifinals.

Cornerstone Christian is located in Birmingham, but Tisdale said he’s given no thought to his opponent wanting to beat Keith to earn a chance to play in its home city.

“You could be a mile away or 100 miles away, the route to get you there will be the same,” Tisdale said.

The school has a different name, but Tisdale is hoping for a similar result. Just like in 2011, though, he knows it won’t be easy.