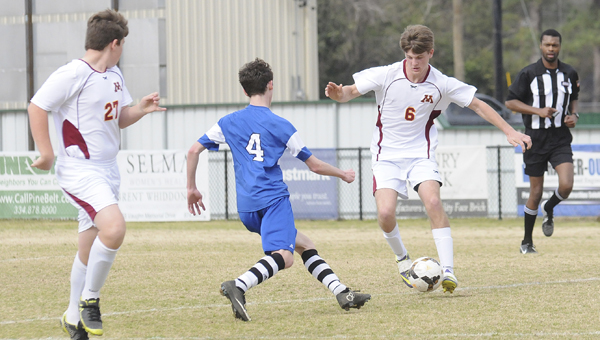 Daniel Portwood scored a goal in the waning minutes of the first half to lead the Morgan Academy boys’ soccer team to a 1-0 win Saturday over Kingwood Christian.

The Senators controlled possession most of the match and had numerous chances to score, only to be turned away by Kingwood goalie Brady Davis time after time.

Davis leaped high into the air to turn away shots several times and also caught three Senators’ throw-ins near the goal during the first half.

Near the 40 minute mark, Portwood broke a scoreless tie by firing a shot past Davis.

Neither team scored in the second half.

The Senators had four straight corner kicks in the second half, but ended up scoreless on all four.

Morgan Academy goalkeeper Alex Poe only had to turn away a shot or two the entire match as the Senators kept control.

Morgan played its first game Saturday without senior Diyan Patel, who broke his nose in a game versus Lee-Scott.

Minter said Patel will be out until at least spring break but will wear a uniform and be available for penalty kicks, if a game stays tied to that point.

The Senators will host Tuscaloosa Monday at 5:30 p.m.

The Morgan Academy girls were off Saturday, but will also retake the field Monday at 7 p.m.

The start of the city of Selma’s baseball and softball season is still a few weeks away, but many of... read more