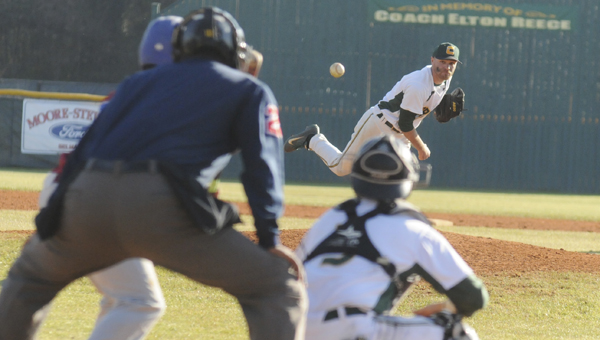 Lane College defeated Concordia College Alabama 6-4 Friday at Bloch Park and ended a 38-game losing streak that dates back to 2014.

The teams actually split a doubleheader, with Concordia (3-13) winning the first matchup 8-2, but that hardly seemed to matter following Friday’s second game. While the Lane (1-9) dugout was celebrating a win for the first time in two years, the Hornets were trying to explain base running miscues and defensive mishaps that allowed the game to slip away.

“There’s no excuse for it,” said Concordia coach Curtis Wimberly. “We let them hang around too long and when you let winless teams like that hang around with you, they’ll beat you.”

The game swung in the fifth inning on a sharply hit ball to Concordia shortstop Nyles Freeman. With the score tied 2-2 and two runners on and only one out, Freeman raced to the ball in an attempt to turn a double play. Instead, he ran into teammate Jamel Stewart and went down in pain.

The ball fell to the ground and Ronald McGhee and Robert Love IV both scored, giving Lane a 4-2 lead.

“The pitcher gets us the ground ball we need and shortstop is going to make the play and lack of communication between shortstop and second baseman,” Wimberly said. “… Now you’ve got a shortstop who is probably out, not sure how bad it is going to be and we didn’t get out. We got one out [from] that and they scored two runs.”

Concordia closed within one in the sixth when Darius Ford singled to right field, scoring Javone Johnson. On the next play, Zakir Jordan bunted, but a Concordia runner was thrown out at home for the first out of the inning.

Stewart struck out and Matthew Murphy grounded out to end the inning, leaving two runners stranded.

In the top of the seventh, Lane added to its lead.

Love IV singled scoring Dante Clark to make it 5-3 Lane. A single by Blair Dukes then scored Love IV to put Lane up 6-3.

In the bottom of the inning, Concordia’s Jason Price scored on a throwing error, but the Hornets again left two runners stranded. When Keion Allen, who threw all seven innings for Lane, pitched a closing strikeout, the dugout erupted in celebration.

“It’s been a long time coming,” said Lane College head coach Mike Henson. “To get that first one and move forward, I told them when we get the first one the second one will be a lot easier. It won’t be 38 more before we get the second one.”

Lane lost its last five games in 2014 and went winless in 2015. The Dragons had also lost their first nine games of this season.

The win was Lane’s first victory since a win on April 16, 2014, against Lemoyne-Owen College. It was the first road win for the school since a sweep of Rust College on March 19, 2014.

“We are trying to get cute and take a base that we don’t need,” Wimberly said.

Dustin Holmes started the game at pitcher for Concordia and threw five innings. He gave up four runs and was credited with the loss. Darius Ford entered in relief and pitched the sixth inning and part of the seventh before Jason Bates entered to finish the game for Concordia.

The Hornets are scheduled to play again at Rust College in Holley Springs, Mississippi on Feb. 26-27.