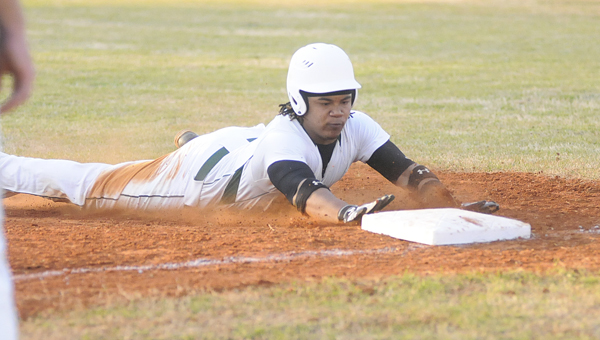 Just a handful of batters had stepped up to the plate in the Dallas County Hornets’ first game of the season, and already they found themselves in a 4-0 hole. A few innings later, however, Dallas County took the lead and never let go.

The game started off shaky for the Hornets. The Rams opened with two singles and a walk. A Dallas County error allowed Francis Marion to build an early lead.

“To start with, we didn’t want to be here,” said Dallas County head coach Cody Massey. “Our head wasn’t in the game. We felt like that we’d just show up and we’d win the ball game, which isn’t the case.”

In the bottom of the third inning, the Hornets started their comeback. Patrick Haskell got on base after getting hit by a pitch. Haskell was the first Dallas County player to score after one of Friday’s many Francis Marion errors allowed him to dart home from third base.

A couple batters later, Caleb Lester blasted a triple that brought Willie Lofton across home plate. Andre Smith scored the tying run in the third inning when he safely slid head first into home after a high pitch got past the catcher.

Gabe Denson dropped an RBI single into short center field to send Delando Atchison from third to home to give Dallas County a 5-4 lead at the end of the third inning.

“When we finally got a little bit of confidence the second time around through the lineup, we finally started hitting the ball and putting the pressure on them, and it started to work out for us,” Massey said.

Cole Robertson, who secured the win at the mound for Dallas County, struck out the sides in the fourth inning to maintain Dallas County’s lead. Lester drove home Haskell in the bottom of the fourth to extend the lead to 6-4.

Francis Marion scored a run in the top of the fifth inning, but Atchison, a catcher, tagged a runner at the plate to keep the Hornets in front 6-5.

In the bottom of the fifth, Atchison led off with a single and stole a couple bases off Francis Marion errors. The Rams’ errors continued on the next hit, which allowed Joseph Jones to send himself and Atchison around the bases on an in-the-park home run.

Through five innings, the Hornets led 8-5. Atchison hit an RBI double in the sixth inning to send Smith and Henry Baker home, giving the Hornets an 11-5 lead. Lester closed the game out at the mound for the Hornets.

While the Hornets closed strong, Massey said he is hoping for a better start in Dallas County’s next game.

“They put all the pressure on us early and we didn’t respond to it, so we’ve got to be loose coming out of the gate,” Massey said.

Dallas County is back at home Monday against Isabella.