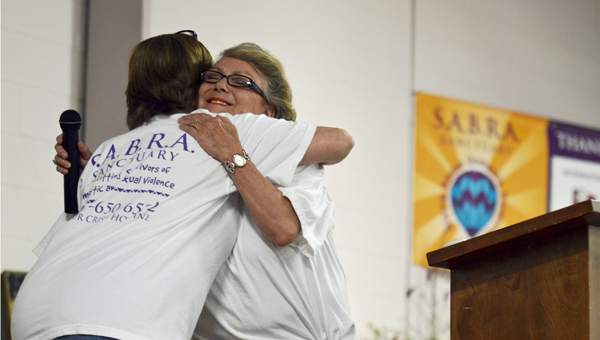 “We’re just hoping to raise a lot of money for our victims and survivors of domestic violence,” said Nancy Travis, SABRA executive director.

This year’s theme was “Blue Jeans and Bling” and was catered by KFC.

At 6 p.m., supporters trickled in for social hour, the silent auction and raffle purchases. About 30 silent auction items and 15 raffle items were up for grabs, varying from cakes to art.

“When I saw all the items up for auction, I was really overwhelmed. SABRA has so much support,” said volunteer Mary Hodo. “It’s wonderful.”

Raffle tickets were sold according to the value of the item being raffled off, starting at $1.

Travis said last year’s fundraiser raised nearly $13,000. She said their goal this year was to exceed that and believes it’s possible because they have better auction items this year.

“We’re so excited, we’ve got a great crowd out here tonight and we’ve got some wonderful things donated by all the people in Selma,” Travis said.

“I hope you got what you want,” he said to the audience after announcing the silent auction and raffle was closing.

Some of the larger purchases of the night include the Canada fishing trip, racking in a whopping $2,200. The beach and camping trips sold for $500 each.

“It’s a great fundraiser for something that’s very much needed,” Massey said. “[It’s] a good way to get out and raise money and also have a good time… it’s a lot of fun.”

Travis said it will be a few days before they can determine the total funds but is thankful for all of the support.

“We just want to thank everybody for coming, everybody that donated and all of our wonderful sponsors,” Travis said.

Sandy Greene dishes up a bowl of chicken and sausage gumbo during the Lenten lunch Wednesday at St. Paul’s Episcopal... read more