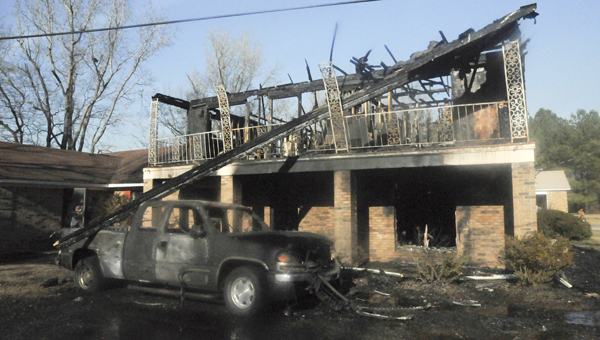 The home of Dallas County Commissioner Curtis Williams near the Beloit community burned Thursday afternoon in a house fire.

County Commissioner Curtis Williams lost his home in a Thursday house fire. Fire investigators believe faulty wiring in the attic may have caused the blaze off County Road 162.

Fire fighters and community members from Beloit, Orrville, Potter Station and Selma Fire Departments along with the Selma and Dallas County Rescue Squad all helped to put out the fire. It took the combined effort more than three hours to completely put the fire out.

Beloit Fire Department Chief Derrick Gayle said the fire was out of control by the time his department arrived.

“It was burning bad. It took us two and a half hours to get the fire under control,” Gayle said. “It took about another hour or so to get it to where there was no more smoke.”

Nobody was at home at the time of the fire, and no injuries were reported.

Williams said his family has received much support from the community as news about the fire spread. He and his wife Jerolene said the do ask for one thing — prayer.

“Ask God to sustain our family and keep us strong during this perilous time,” Jerolene said. ”I know he knows that I love him and I’m called to his purpose. We’re going to go on in Jesus` name and run this race to the end.”

At this time, she said the cause of the fire is uncertain. A preliminary investigation shows the fire might have been caused by damaged electrical wiring. A more thorough investigation will take place.

“I know God is in charge. The support has been tremendous. People are still coming in and all of my local family members are here,” Williams said.