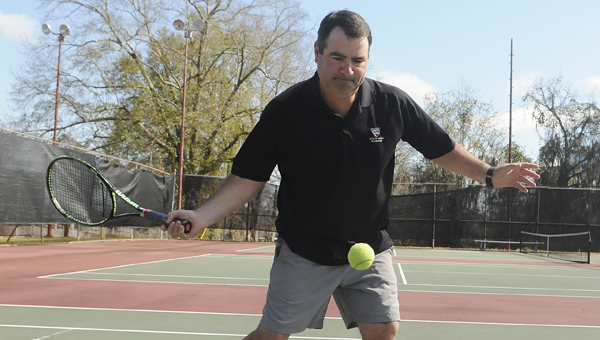 Baxter Stinson hits a tennis ball Wednesday at the city of Selma’s tennis courts. Stinson was named the tennis professional of the year by the USTA’s Alabama Awards Committee and will be honored Saturday in Montgomery. –Daniel Evans

Selma’s Baxter Stinson was named the tennis professional of the year by the United States Tennis Association’s Alabama Awards Committee.

Stinson, who serves as the head professional at the Selma Country Club and also coaches the Morgan Academy tennis teams, said he was honored when he received a letter notifying him of the award.

“It’s obviously flattering,” Stinson said. “It is humbling to be given an award for something you love doing, and it’s your job.”

Stinson runs the junior development program at the Selma Country Club and has over 50 youth in his programs. He has been Morgan Academy’s tennis coach for the last 16 years and has led the Senators to numerous state championships. Last year, Morgan Academy’s boys’ team finished No. 2 in the Alabama Independent School Association state tournament for the fourth straight year and the girls finished No. 3.

“He has done a phenomenal job with his teams and he’s an encourager. He teaches the kids well and keeps them on path,” said Ruth Talton, who has had four children play tennis for Stinson. “Within the city of Selma, he has been instrumental in introducing the game of tennis to a lot of people.”

As a team coordinator for the USTA, Stinson and Stacey Adams coached the 14 and under Alabama junior tennis team to a state championship in July. The entire team was made up of players from the Selma area.

He also serves as a league coordinator for the USTA and has captained several teams. As a lifelong tennis player, he still has participates in 40 and over leagues, combo, tri-level and mixed-doubles league tennis.

“Tennis is a sport you can play for a lifetime,” Stinson said.

“I’ve been playing for 32 years and don’t plan on quitting any time soon. It’s fun to teach young kids how to play. I take a lot of pride in that the fact that kids I teach are still playing as adults.”

On its website, the USTA says the honor is “awarded annually to the professional that demonstrates a significant contribution to the game of tennis through their promotion of the USTA’s programs and their support to the USTA Mission Statement.”

The USTA will recognize Stinson and its other award recipients at a banquet Saturday at the Montgomery Country Club.