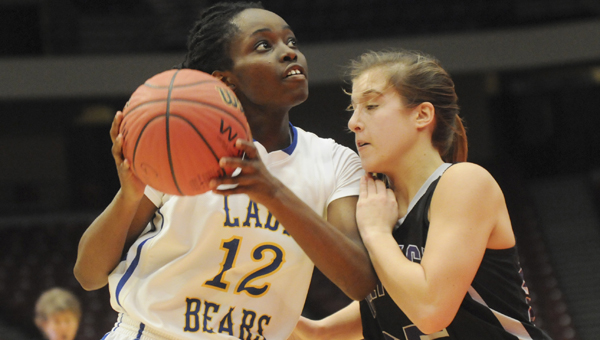 Keith’s Harriet Winchester gets ready to shoot during a game last February against Decatur Heritage. The Bears are two wins away from getting back to Birmingham. They play at 3 p.m. Thursday against Notasulga. –Daniel Evans

Three local teams will try to continue their pursuit of an Alabama High School Athletic Association championship Thursday in Montgomery.

Selma will kick off the action at noon against John Carroll. Keith’s girls’ team will play Notasulga at 3 p.m. and the Bears’ boys will take on Jefferson Christian at 4:30 p.m.  Here’s a look at what each team will face Thursday:

Selma (26-5) is back in Montgomery for the Central Regional Tournament for the 11th time in 13 years, but the Saints hope to go a lot further.

To stay in the playoffs, Selma will have to get past high-scoring John Carroll Thursday at noon at Alabama State University.

John Carroll has averaged 74.1 points per game over its last 13 games, including scoring 100 points in a one-point sub-regional win over Opelika on Monday night.

Selma’s hasn’t scored 70 points in a game all season, which shows the clash in styles.

“We can’t go down and just shoot it,” said Selma head coach Anthony Harris. “We’ve got to play some defense to stop them from putting up 100 points.”

Harris said John Carroll loves to shoot the 3-ball and wants to play a fast paced game. He said it’ll be important for the Saints to limit each John Carroll possession to only one point.

Selma defeated Bessemer City 50-48 in the sub-regional round of the playoffs to get to Alabama State. A win by the Saints will mark two straight years Selma reached the Central Regional championship game.

The Keith girls (28-2) are only four wins away from winning back-to-back state championships. The defending 1A champs will take on Notasulga at 3 p.m. Thursday at Alabama State University.

Notasulga (9-10) has lost four of its last seven games coming into the tournament, with two of those losses coming to Loachapoka, another team in the 1A girls’ central regional field. The Blue Devils defeated Jefferson Christian 44-41 on Monday to advance past the sub-regional round of the playoffs.

Keith rolled past Billingsley 69-21 to keep its season alive. The Bears have only lost two games all season — their opener to Selma and an early January game to Wilcox Central.

Keith (24-6) has stormed back Ellwood Christian in the area 5 championship game and led throughout a 25-point win over Maplesville on Tuesday. The Bears will try to keep rolling against a Jefferson Christian (17-8) team that defeated Loachapoka 65-57 on Tuesday night in a sub-regional game.

With less than 48 hours to prepare for Thursday’s game, Keith coach Tommy Tisdale said he’s been quickly trying to formulate a game plan against a school he knows little about.

“You’ve got a foreign opponent with zero common opponents, so I had to get on the horn to use my networking skills to find out what they’ve got, what they do, who does what,” Tisdale said.

Jefferson Christian enters after winning nine of its last 10 games. Keith is undefeated in 2016 against opponents not named Bibb County.