Wallace falls behind early, can’t catch up to Marion Military 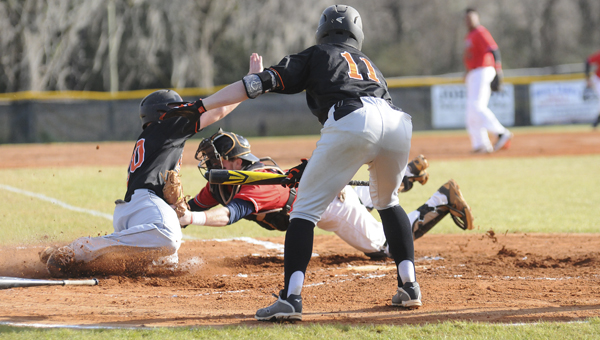 Wallace Community College Selma’s Chandler Mullins hit his first career home run in the second inning, but that was one of the only highlights for the Patriots Tuesday in a 10-2 loss to Marion Military Institute.

Marion’s Zachary Neumann had four RBIs, including two doubles. Carson McGregory brought in two more runs on a first inning double down the right field line that gave the Tigers the lead for good.

“It was a combination of everything,” said Wallace coach Frank Elliott. “If you don’t hit good and you don’t pitch good, you don’t win good.”

Marion had twelve hits off of four different pitchers for the Patriots (5-2). Chad Silvani was credited with the loss after allowing four runs in four innings.

Marion had twelve hits in all and led throughout after taking a 4-0 lead after four innings of play. Wallace got on the board on a throwing error by the Tigers, which scored Brondrick Johnson in the bottom of the fourth.

Marion threatened to add to its lead in the fifth, but Mullins fielded the ball near second base and threw to first base for a double play that got the Patriots out of the inning. Mullins throw came as Marion’s Logan Nix slid under him.

Mullins backed up a great defensive play with an even better offensive one. As the first batter to hit in the bottom of the fifth, he crushed the ball over the left field fence for a home run to bring the Patriots to within 4-2.

Marion ended any thoughts of a Wallace comeback with a six-run sixth inning. Will Harrell, in to relieve Silvani, allowed two hits to begin the inning. Tyler Payne relieved Harrell but didn’t fare much better.

Neumann hit a double off Payne to score Jonah Todd and Landon Sartain, putting Marion up 6-2. A wild pitch later In the inning allowed Neumann to score and a single by Cole Lepchitz tacked on another two runs for the Tigers.

At that point, Wallace subbed Blake Mayes in for Payne.

Mayes gave up another run on a single by Sartain, making the score 10-2 Marion.

“We didn’t start off getting ahead in the count and that’s a good recipe for getting beat,” Elliott said. “They had timely hitting when they got people on base, so my hats off to them. They beat us.”

Wallace pitcher Tyler Payne throws a pitch during the second game of a doubleheader Thursday at Bloch Park. The Patriots... read more