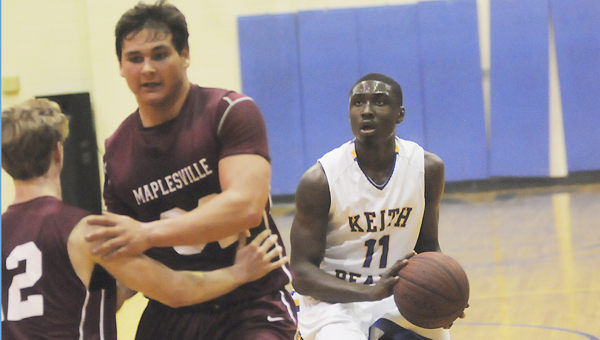 Keith’s John Pettway lines up a 3-pointer during Tuesday night’s sub-regional game in Orrville as two Maplesville players try to get in position to defend the shot. Keith won the game 73-48 and will make a trip back to Montgomery for the Central Regional for the first time since 2014. –Justin Fedich

ORRVILLE — The Keith boys are headed to Montgomery.

The Keith Bears (24-6) never trailed in a 73-48 home win over the Maplesville Red Devils in the sub-regional round of the class 1A tournament Tuesday. John Pettway didn’t slow down the entire night, leading all scorers with 27 points.

The Bears have one day of rest before traveling to Montgomery for the regional round of the class 1A tournament Thursday against Jefferson Christian at 4:30 p.m.

“Once you get away from your confines, anything can happen,” said Keith head coach Tommy Tisdale.

Dontavious Thomas hit four 3-pointers on the night, including the first one that gave Keith a 3-0 lead. Two minutes into the game, Pettway weaved his way through traffic for a layup to put Keith up 9-0.

Maplesville scored its first points of the game with 5:30 remaining in the first quarter, but Thomas answered another 3-pointer to give Keith a 12-2 lead.

Morris Collins and Jimmie Powell each scored two-point shots for Keith, and Pettway finished the quarter with a layup in transition to put the Bears in front 21-9 at the end of the first quarter.

Pettway scored the first four points of the second quarter for Keith, but Maplesville came fighting back.

“This is probably the best Maplesville team I’ve seen in seven or eight years,” Tisdale said.

Pettway squared up for a 3-point jumper in response with 5:30 left in the second quarter, and then got fouled on his next 3-point attempt.

Pettway made all three free-throw attempts, and Keith took a 31-20 lead.

The Red Devils wouldn’t get close to the lead for the remainder of the game. Two-point shots from Dalven Johnson, Pettway and a 3-pointer from Thomas put the Bears up 40-23 at the half.

Keith took time off the clock in the fourth quarter to secure a convincing victory.

Tisdale was happy with the team’s offensive effort, but he said in order to keep winning, the Bears need to play strong on both sides of the ball.

Wallace falls behind early, can’t catch up to Marion Military