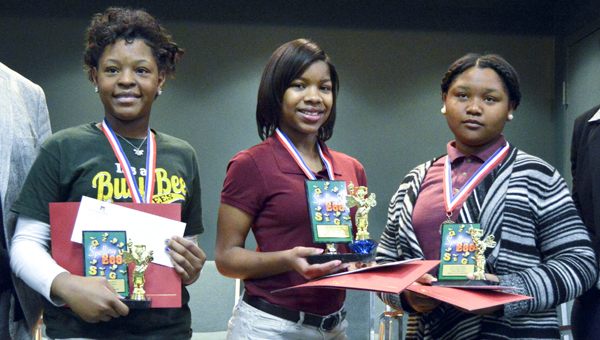 Aniya Mitchell, Jo’Niya Chapman and Jakayla Boone pose for a photo after placing in the county spelling bee Friday.

A R.B. Hudson Middle School student will advance to the Alabama Spelling Bee next month after winning the local competition Friday morning at the Selma-Dallas County Public Library.

Jo’Niya Chapman won after correctly spelling the word “pangolin,” which is a scaly anteater that lives in Africa and Asia.

“Spelling is kind of a lost art. We text so much. We have spell check on our computers. You don’t have think anymore,” said Don Willingham, Dallas County superintendent.

The 22 contestants from 11 schools, their parents, teachers and principals gathered for the county bee.

The contest began just after 9:30 a.m. with a warm-up round before proceeding to the main event.

Chapman as well as Edgewood Elementary’s Aniya Mitchell and her fellow R.B. Hudson representative Jakayla Boone were the final three after five rounds. Mitchell was eliminated in round six and finished third. Chapman and Boone went back and forth for seven more rounds. Chapman finally won in the 15th round.

The top three finishers were awarded trophies and cash prizes from First Cahawba Bank. Chapman was awarded $400, Boone $200 and Mitchell $100.

Chapman’s parents, Billie and Joe, said they are very proud.

“It means a great deal. We are proud of Jo’Niya,” Billie said. “She said she was going to win and she won.”

Billie said her daughter has been competing in spelling bees since the third grade.

Chapman said she was still surprised to win and studied constantly to get this far.

“It was very unexpected,” she said. “I studied every night, and it took a bit of encouragement from my parents and everyone who helped me.”

She said even though she won first place, she believes everyone is a winner because they made to county level in the competition.

Chapman will represent Dallas County in the state spelling bee in Birmingham on March 12.

Controversy has arisen of the city of Selma and the Bridge Crossing Jubilee over competing events and sponsorships as well... read more