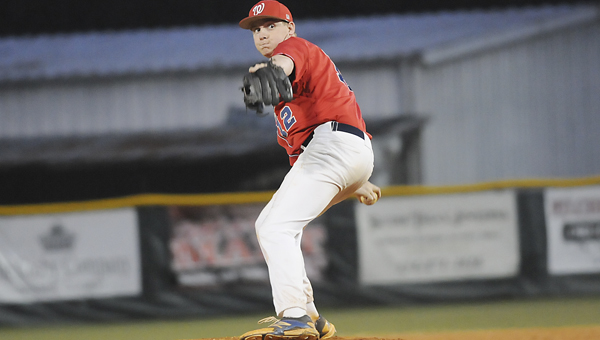 When the Wallace Community College Selma Patriots opened the first inning with four runs, it appeared they were headed for a sweep of the doubleheader at Bloch Park Thursday.

The Patriots (5-1) went scoreless through the final six innings and lost 6-4 to the Meridian Community College Eagles. Meridian’s Hunter Mullis pitched a complete game to hand Wallace its first loss of the season.

“We’ve got a team that fights the whole way,” said Wallace head coach Frank Elliott. “Our better hitters just couldn’t quite get it going there when we needed it to.”

Early, it appeared Wallace was going to cruise to its second victory on the day. After scoring four runs in the first game against Faulkner University, the Patriots equaled that total in the first inning.

“It’s like our sticks went dead after we went up 4-1,” Elliott said. “I guess we were satisfied with four runs.”

Wallace starting pitcher Tyler Payne struck out the sides in the second inning, but didn’t last as long as Mullis when Meridian started to crawl back into the game.

Errors played a big role in Meridian’s comeback. Baylor Obert scored for the Eagles after hitting a triple and then running home during the next at bat off an errant pitch from Chase Laney. The run allowed Meridian to pull within one point of tying the game in the fourth inning. Jordan Calvert made a diving catch for the Patriots in center field to temporarily stop the bleeding for Wallace.

Meridian tied the game in the fifth inning with a two-out RBI single, and then took a 5-4 lead in the sixth inning when Blake Fields scored off a wild pitch from Wallace’s Blake Mayes.

Johnson tried to lead a comeback in the sixth inning when he blasted a double, turned to the Patriots dugout and flexed his muscles. Wallace couldn’t send him home, as Obert scored the final run of the game in the seventh inning to give the Eagles a two-point victory.

“We had a couple opportunities,” Elliott said. “It just didn’t quite happen for us.”

In the first game of the day, a late string of base hits sealed a 4-1 win over Faulkner University.

Calvert singled in the third inning. After Lowe and Joseph Simonetti got on base, Calvert made it to home base. The game was tied 1-1 for much of the way until the sixth inning.

Lowe, Simonetti and Johnson each opened the sixth inning with base hits. Friday stepped up to the plate and hit a triple to send all three home and put the Patriots ahead 4-1.

Wallace pitcher Tanner Thomason led the way at the mound for the Patriots, only allowing one run all game.