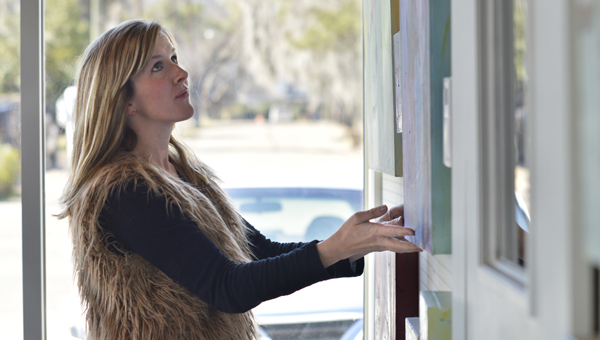 Gallery 905 assistant manager Kristen Jones hangs new paintings Thursday in the gallery. The studio opened before Christmas but since closed for final renovations.

Gallery 905 is officially reopening its doors to the public.

The gallery first opened under a temporary business license during November and December but had to close after Christmas to finish renovations. The gallery was expected to reopen today.

Becky Youngblood, gallery manager, said she and assistant manager Kristen Jones have been busy collecting new art when the gallery was closed.

“We have lots of new art and new artists,” Youngblood said. “We’ve had fun collecting it over the past month when we’ve been closed.”

She said they traveled all over to collect work from artists in Alabama, Mississippi, Florida and elsewhere.

Ten new regional artists have made their way into the gallery such as Mary Ann Casey, Chad Mars, Donna Burgess, Cary Pittman, Larry Rackley and others.

Popular items sold during November and December have been replenished to fulfill demand.

Art works range in price, beginning at $10 and upward to thousands of dollars.

The gallery will have a grand opening on Thursday, Feb. 25 from 5 p.m. – 7 p.m. Hors d’oeuvres and beverages will be served.

“It will be a festive atmosphere,” Youngblood said.

The grand opening will also include special discounts and door prizes.

Jones said having the reopening is a realization of the gallery’s progress.

“We’re just one step closer to realizing our vision. We’re excited,” Jones said. “We’re not there yet, but we are well on our way.”

For more information about the gallery, call 878-1905 or visit its Facebook page, Gallery 905.