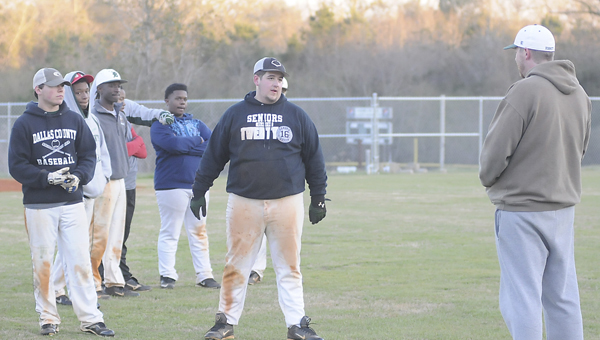 Dallas County head baseball coach Cody Massey wants to have his team mentally prepared for every situation this season. At a Wednesday practice, he had his players line up on first and third while a pitcher, catcher and second baseman tried to stop them from safely stealing a base.

The Hornets don’t want to just steal a few extra bases this season. They want to steal an area championship.

Last season, the Dallas County Hornets finished second in their area to Demopolis and lost in the first round of the playoffs to Marbury. With only one senior gone from last year’s Dallas County team, Massey is confident that continuity and leadership can bring his team further than in past seasons.

Massey ‘s message to his team this season is “it’s up to you.” It’s something he emphasizes to his team to push them to hit the weight room and practice fielding ground balls and hitting even on their time off.

“We can’t be at every place at every time, so it’s up to them to make sure that they’re getting in the work when the coaches aren’t around because if they can do it themselves, then it’s going to transfer into the game,” Massey said.

Massey said he hopes his team commits to getting better outside of practice, but during practice, he’s put a focus on hitting. Last season, Massey said his team’s batting average wasn’t where it needed to be and often prevented his players from winning an offensive battle.

With many of the same players on this season’s roster, Massey said he knows that hitting won’t suddenly turn into the team’s biggest strength. If he can prepare his team to play mentally sharp baseball when they are running the bases or fielding, Massey said he believes his team can make it far in the postseason.

“I told our kids if we get into a 12-10 game, something’s wrong,” Massey said. “We just don’t have the hitters to be able to do that. Our biggest challenge is going to be making sure that we execute when we’re supposed to execute, play small ball and get the runs when we have the opportunity to get them.”

Massey, in his fourth year at the helm at Dallas County, has seen many of the upperclassmen-laden team grow up and mature the past few years. The Hornets have six seniors and seven juniors, and he expects several of them to step into leadership roles this season.

Massey said Delando Atchison will be one of those players.

“He came on great for us as a starting pitcher for us and if he can pick up where he left off, that’s going to help us tremendously,” Massey said.

Shortstop Cole Robertson is another player who Massey expects a big contribution from this season. Last season, Robertson was plagued by arm issues that hindered his ability to throw. As an infielder and pitcher, Massey said he believes having Robertson back at full health will make a big difference.

Center fielder Willie Lofton is someone who Massey said not only loves the game perhaps more than anyone on his team, but has the speed to cover the outfield.

“There’s not many balls that are hit in the outfield that he’s not going to be able to get to,” Massey said.

Even with his team’s continuity, Massey still acknowledged that Demopolis is known for its baseball and will again be expected to finish first in the area. He doesn’t want his team to meet expectations this season. He wants to exceed them.

“If we make every routine play against teams like [Demopolis], we’ll be in the game,” Massey said.