Morgan’s Spivey takes leadership role in and out of lineup 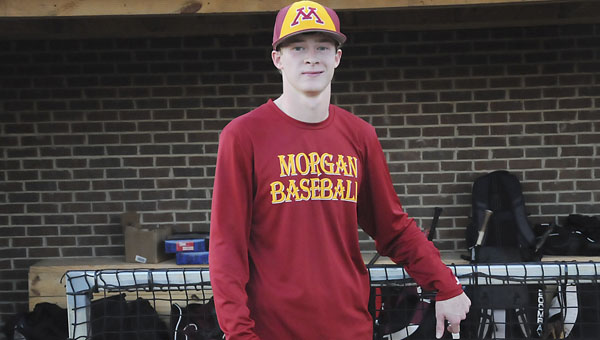 Morgan Academy senior Miller Spivey has high hopes for himself and his baseball team in his senior year. He believes his team has the pieces in place to win a state championship this season. — Justin Fedich

Miller Spivey was caught in a pickle.

He was in the middle of first base and second during a game at practice when the throw came into second base and Spivey realized he wouldn’t make it in time. He sprinted back and forth between throws before sliding safely into first base.

With one final season remaining in a Morgan uniform, Spivey isn’t going to hold back on running for an extra base if he sees the opportunity. As one of the fastest players on a Morgan roster, Spivey doesn’t plan on hesitating as he and his team chase after a state championship.

Spivey, an 18-year-old senior at Morgan Academy, is coming off a baseball season shortened by a dislocated shoulder. He wasn’t a part of the team’s playoff run last year, but this season he looks forward to pushing his team further than last season, when the Senators fell in the second round of the region playoffs.

“He’s healthy for us this year so that’s a good thing for us,” said Morgan head coach Jeremy Carter.

As the lead-off batter in the lineup and a second baseman, Spivey has proven to be a leader on the field as well as off it. Carter said he expects Spivey to be one of the top contributors on the team this season.

Although Spivey is one of the more soft-spoken senior leaders on the team, he embraces his role as a leader this season. He sees plenty of young talent on the Senators’ roster, and he’s looking forward to being a mentor toward the less experienced players.

“I think it’s a great opportunity to be a role model for those younger kids, especially those 10th graders that are coming up,” Spivey said. “They’re something special.”

Morgan’s senior teammate, Woodham Kemmer, said Spivey not only leads with his voice but also with his actions. Kemmer said Spivey’s passion for baseball can be infectious to the other players on the team.

“It challenges them to get better,” Kemmer said. “Other players look at Miller and want to get up to his level of hitting and fielding and just being an all-around good baseball player.”

Kemmer said a great quality about Spivey is his willingness to be a team player. Before football season and after Spivey had recovered from his shoulder injury, Kemmer and a group of seniors asked Spivey to join the football team. They knew his speed would help their offense thrive, and he played a significant role at wide receiver this past season.

“He was nervous about it at first but he really helped our football team,” Kemmer said. “He’s just a really good athlete.”

The bond that Spivey shares with his senior class is something that constantly makes him strive to become a better baseball player. He wants to win this season not only for himself, but also for his teammates who have been with him from the beginning.

“I feel really good about this team,” Spivey said. “We’ve got a great group of seniors. We’ve been together ever since elementary school in travel ball and just coming up through the years so it should be a very interesting year.”

The comradery Spivey shares with his teammates is also helpful as he prepares for college. Spivey is trying not to think about what the future holds in baseball beyond this season, but it’s come up in discussion with his teammates.

Spivey, along with Kemmer and Jackson Henderson, are all multi-sport athletes who have hopes of playing baseball at the next level. They are all fighting for a state championship, but their drive to play their best this season is also fueled by a hope that someone will offer them a scholarship to continue their baseball careers.

For now though, the focus for Spivey is on staying healthy and starting the season on the right foot. Morgan opens its season at Monroe Academy Saturday at 1 p.m.

Spivey knows there is a lot riding on this season, but the way he describes his role on the team is simple.

By Justin Fedich and Daniel Evans | The Selma Times-Journal The regular season came to a close Friday, which means... read more