Local coaches discuss how, if recruiting is growing in Selma 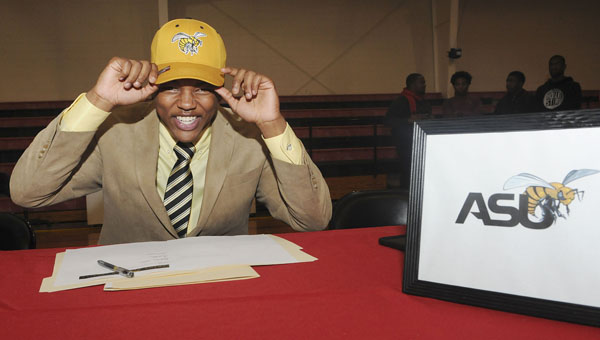 Southside’s Khamari Gibbs puts on his Alabama State hat Wednesday at Southside during National Signing Day. Gibbs signed his letter of commitment to play as a preferred walk-on at Alabama State next season. — Daniel Evans

Over the last six years, 30 players from Dallas County schools have signed scholarships to play college football. Selma, the largest high school in Dallas County, was responsible for 18 of the 30 players.

Saints head coach Leroy Miles said it starts in the classroom because without good grades players wouldn’t even have the option of playing football in college.

“The one thing it says is we hold our kids accountable for getting their lesson and making the grades, and getting that ACT score is important,” said Selma head football coach Leroy Miles. “We really stress academics first because you’ve got to have academics to even get in the door.”

Miles, who has coached in this county for 11 years, said the number of students signing with college programs has increased in recent years. The numbers certainly back that up.

Miles said all five of those players are still in school and still playing football.

Miles said that Hudl, a video recruiting service Selma uses, has played a major role in his players being seen. In many cases, coaches aren’t even making the trip to Selma to see players before offering scholarships.

That was the case with Moorer and Blevins, who signed after coaches at Waldorf College in Iowa saw tape of them on Hudl.

“Kids can make a highlight film after every game,” Miles said. “At the push of a button to an email address you can get that film to a coach.”

Selma isn’t the only local school that has had recruiting success.

Dallas County has three players on active college rosters — Lowell Furlow and Xavier Knight at Tennessee Tech and Justin Chandler at Faulkner University. Keymiya Harrell was a senior at Auburn during the 2015 season.

Although he said 30 is a strong number, Hornets head coach Marty Smith believes even more football players from the Blackbelt area can make it to the college level. Smith said local players are at a disadvantage because they often go unnoticed in this area, whereas students with the same athletic qualities in Birmingham, Montgomery and Huntsville are seen on a regular basis.

“Those college coaches are going to spend more time with those kids in Birmingham, Huntsville and Mobile because it costs less to recruit those kids,” Smith said. “They are already in the area recruiting other kids so it’s easier for them to go by. It becomes a budget number situation.”

Smith said local teams can combat that by building strong programs that can compete around the state and then scheduling some games outside of the Dallas County area.

“We’ve got to get out and go play some other teams that are not in this area to increase the brand of the football in this area … in order to give our kids the opportunity to play at the next level,” Smith said.

Other high schools have also had players sign with college programs over the last few years.

Morgan Academy has an active Division I player in Hunter Rogers at Middle Tennessee. J.R. Wood, who signed as a preferred walk-on with Troy Wednesday, will also soon be playing Division I football. A third signee, Parker Hughes, who signed with Faulkner in 2012, is no longer listed on the Eagles’ active football roster.

Keith’s Maurice Crumpton signed with Stillman in 2013, but has transferred to play at Southern Miss. The Bears other signee since 2011, linebacker Demarquis Lumpkin, signed with Tuskegee, but is no longer listed on the Tuskegee roster.

Meadowview Christian’s Tyler Perry and Gregg Piper signed with Faulkner University in 2011, but neither played football for the Eagles in 2015.

The list of players who signed over the last six years was compiled by talking to current head football coaches and by going through the Times-Journal’s archive. Many other players from the Selma area have played college football over the last six years, but this list was meant to show only those that had signed during that time frame.

Concordia College Alabama shuttered its football program after the 2015 season, but many local athletes have played for the Hornets in recent years. An accurate list of local athletes that signed athletic scholarships with Concordia could not be compiled for this story. It was also unclear whether all of these athletes signed letters of intent. Some of them, like Wood and Gibbs, may have signed letters of commitment as preferred walk-ons. A preferred walk-on is guaranteed a roster spot but is not given an athletic scholarship.