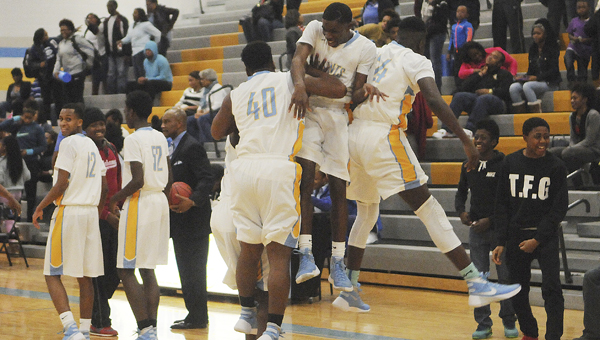 Davis stole the ball on a Tigers’ inbound pass with less than 10 seconds to play and was fouled. With 4.5 seconds left, he knocked down two free throws to help the Saints rally for a 43-42 win.

“Cool hand Davis,” said Selma head coach Woodie Jackson. “I felt like he would [make the free throws]. He and [Kentravious] White are our two best free throws shooters so we had confidence he was going to make them.”

After the second one rattled in, Demopolis passed the ball down the court but missed a final shot.

When the final buzzer sounded, the Selma players jumped from the bench in celebration.

For the seniors — Marshall Woods, White and Davis — it was one final chance to celebrate on their home floor.

“We hadn’t won in a minute… we were fortunate to win. We were blessed to win,” Jackson said.

Selma (10-15) trailed 26-24 at the end of the third quarter, but got down as many as five in the final quarter. Derrick Birl made two three-pointers in the fourth to give Demopolis a 37-32 lead.

With just over two minutes to play, Ratreavis Sanders leaped out of bounds to save a loose ball and found White wide open at the 3-point line. The senior knocked down the trey to pull Selma within 37-35. On the ensuing Demopolis possession, White stole the ball and raced the other way for a game- tying layup.

A 3-point play by William Wilkins helped Demopolis take a 40-37 lead. Selma’s Kevin Jones knocked down a jumper at the other end to cut the Saints’ deficit to one. After two free throws by Josh Moore, Demopolis was back up three with 33.6 seconds to play. A rebound and layup by Sanders cut that lead to one and then Davis stole the inbounds pass and won the game at the free throw line.

Before the game, Selma honored all of its seniors, including Aderick Moore and Kiwansis Jones, who were both lost for the year with injuries.

Selma will play Hillcrest at Paul Bryant Thursday in the first round of the class 6A, area 6 tournament.

The Selma Saints look ready for the postseason.

Behind 28 points from Areyana Williams, Selma defeated Demopolis 58-48 Friday in each team’s regular season finale. Selma (23-4) fell from the final rankings, but the game was a battle between teams that had been in the top 10 of the Alabama Sports Writers Association rankings throughout the year. The Saints turned it into a one -sided contest for most of the night.

Demopolis pulled within seven after Courtney Hill’s deep two-point jumper found the bottom of the net with just over 1:30 to play, but after a Selma turnover gave the Tigers the ball right back, Demopolis couldn’t inch any closer.

Kynadra Lewis made two free throws and Williams tacked on a layup to help Selma extend its lead in the final minute.

Williams did it all. She scored 20 of Selma’s 30 points in the second and third quarter to help the Saints take a 16 point lead. Over the last two games, she’s averaging 28.5 points per game.

The Saints play Paul Bryant at Hillcrest-Tuscaloosa on Tuesday in the class 6A, area 6 tournament.