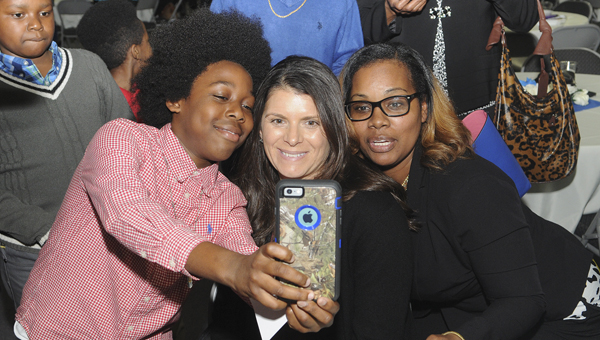 Hamm, who was born in Selma in 1972, was the special guest speaker at a banquet that raised money for a new soccer academy.

“I was born in Selma, and I am extremely proud of that, but I did not grow up in Selma directly,” Hamm said.

“But I grew up every single day with the lessons that my parents learned from being in this community.”

Selma Mayor George Evans presented Hamm with a key to the city and after she spoke, dozens lined up for pictures and to ask her for an autograph.

Hamm, one of the most decorated female athletes of all-time, signed them all.

She said it was her first trip to the city in more than a decade.

“It’s been a while since I’ve been back, so it is wonderful to see some familiar faces,” Hamm said.

Hamm was born to parents Stephanie and Bill Hamm and was the fourth of six children. She opened by talking about the opening years of her life and her short time in Selma, which was approximately around a year.

Bill was in the Air Force and did flight training at Craig Air Force Base, but the family moved around a lot during Mia’s childhood. Eventually, the Hamms moved to Florence, Italy, where Mia developed her love for soccer.

“I think a lot about my life and where I would be without sport and to be honest with you, it scares me,” Hamm said. “So much of what I’ve been able to do and see and learn and love and laugh and experience is because of sport and specifically because of soccer.”

Hamm’s Godparents Jim and Bert Durry still live in Selma and she took time to thank them during her speech.

She also talked about the Mia Hamm Foundation, which she started after her brother, Garrett, was diagnosed with aplastic anemia. Garrett passed away in 1997.

The foundation continues to support patients and their families who need bone marrow or cord blood transplants.

Hamm also is still very involved in soccer. She will be one of the hosts of a Team First Academy Camp in Auburn Friday.

On Thursday, she helped with fundraising for a soccer academy that organizers hope will make the game popular in Selma. Winston Williams, a former soccer coach at Concordia College Alabama, and Derek Arneaud, a former Paralympian in soccer, are part of the group working to get the academy started.

“I think Selma is ready to implement a soccer program, a sport program, that is going to make people know about Selma and be about Selma,” Arneaud said.

All proceeds from Thursday’s dinner went toward the academy. For more information about the academy, contact Williams at 407-6481.

ORRVILLE — Keith head coach Tommy Tisdale made sure to schedule a tough opponent to close out the season, and... read more