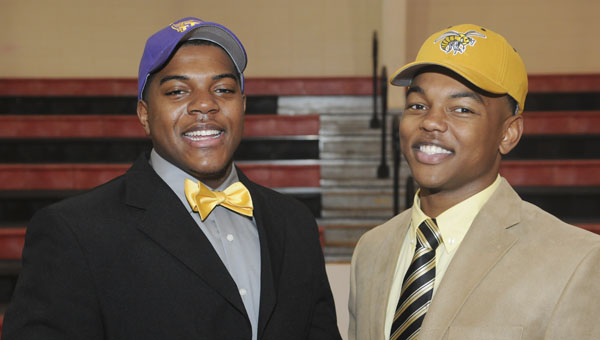 UPDATED: This story was updated Feb. 5 to add additional information about the scholarship Southside’s Khamari Gibbs received from Alabama State.

Southside High School’s Khamari Gibbs used picture frames with logos in them to let friends and family know where he’d be attending college next season.

Gibbs, the Panthers’ standout quarterback, had offers from West Alabama and South Alabama, but he knew all along where he wanted to go. After taking a look at all three frames, he pulled an Alabama State hat from underneath the table and smiled as he put it on.

“I feel at home at Alabama State,” Gibbs said. “It’s almost like a family tradition. My mom went to school there, I’ve been going to games there since I was little. My brother was in the band there. I just kind of grew into Alabama State.”

Gibbs was listed as a honorable mention for the class 4A Alabama Sports Writers Association all-state team this year.  He threw for 32 touchdowns and ran for another four for Southside.

Gibbs received an athletic scholarship to Alabama State and will be a preferred walk-on for the Hornets’ football team.

“I always feel like the quarterback and the coach seem to be a little closer sometimes,” said Southside head coach Daniel Flowers. “I almost feel like Khamari is an extension of who I was when I played ball.”

Flowers was hired as Southside’s football coach four years ago and Gibbs, who was a ninth grader at the time, was one of the first players he met. Gibbs told him right away that he’d be the Panthers starting quarterback as a freshman.

“I kind of thought he was crazy,” Flowers said.

That prediction turned out to be true, as Gibbs led Southside for four years on and off the football field.

He will play quarterback at Alabama State, which was important in his decision making process. Other colleges recruited him as an athlete and wanted him to consider playing other positions.

“That really gave them the edge, knowing they wanted me definitely to play quarterback,” Gibbs said. 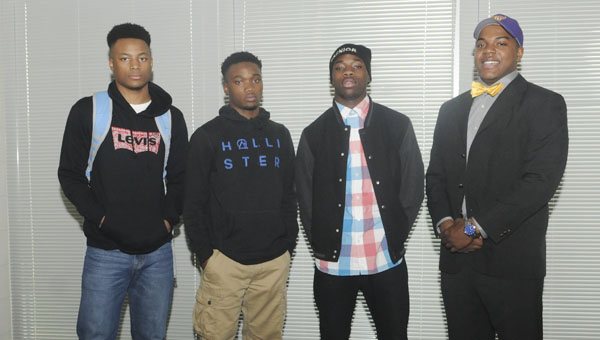 “It was just an awesome experience, the visit, culture, the atmosphere, the team, players, the coaches — I felt at home as soon as I arrived,” Moore said about Tennessee Tech.

The other signees were linebacker Herschell Brown, who signed with Benedict College in South Carolina, and safety Quintez Blevins and defensive back Marquell Moorer. Blevins and Moorer will attend Waldorf College in Iowa.

Moore wants to pursue an engineering degree, which weighed heavily into his decision.

Although he’ll be away from home, he’ll still have some familiar faces nearby. Dallas County High School’s Xavier Knight and Lowell Furlow signed with Tennessee Tech last year 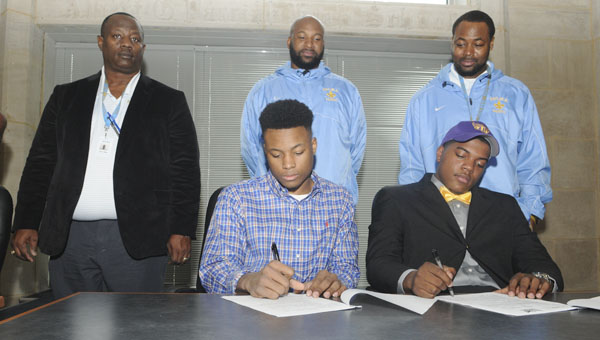 Selma’s Herschell Brown and Aderick Moore sign their letters of intent. Brown is attending Benedict College, while Moore will be going to Tennessee Tech. –Daniel Evans

At Benedict, Brown will be in Columbia, South Carolina and in the same state where his dad started his life after high school.

“It is going to be a great experience. It means a lot, especially getting a full ride,” Brown said. “My dad is real proud that I’m going to college for free. Can’t really beat it.”

“I was overwhelmed because at first I didn’t know where I was going,” Blevins said. “Then a couple of colleges called and said they were very interested in me.”

Moorer was emotional after signing but said going to the same school as Blevins will make it easier to be away from home.

He played quarterback most of the year for Selma, but told Miles at the midway point of the season that he needed to focus mainly on defensive back to increase his chances of playing college football.

As it turns out, that was the right decision.

“It helped out because I’m too short to play quarterback in college so I had to find something else to do,” Moorer said.

With the four signings Wednesday, Selma High School has now had 19 students sign to play college football over the last five years.