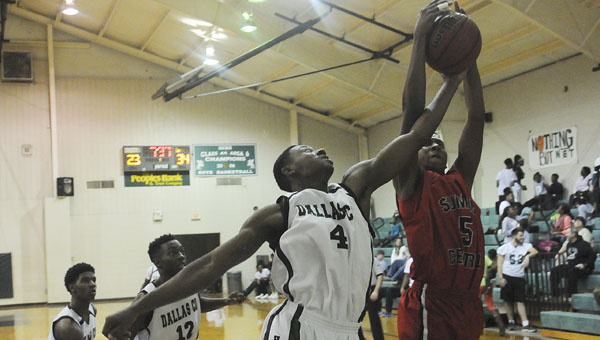 Dallas County’s Josh Benford battles a Sumter Central player for a rebound during last week’s game in Plantersville. The Hornets will face Wilcox Central at Sumter Central in the first round of the class 5A, area 6 tournament next week. –File Photo

Basketball season is all about peaking at the right time and when postseason play gets underway next week, every team can dream about winning a state championship.

During area tournament play, local teams will be spread all over the place — Orrville, Tuscaloosa, York — but can keep their season alive with an opening round win.

The Dallas County School System has had a team in the state championship game three consecutive years, but this year there doesn’t appear to be as many championship contenders — at least not on the boys’ side.

Keith has been ranked in the top three of the Alabama Sports Writers Association poll all year, but Southside is the only other boys team with a winning record (12-11) county wide. The Panthers needed a recent winning streak just to get back over .500 for the first time since they started 4-0.

However, records and rankings don’t mean anything this time of year.  With six state championships to his credit, Selma boys basketball coach Woodie Jackson arguably knows postseason basketball better than anyone.

On the surface, it looks like the Saints don’t have much hope of advancing far this year. Selma has lost three players to season ending injuries and wins have been hard to come by, but Jackson isn’t giving up the fight.

“We aren’t quite as bad as Akron was [last year],” Jackson said following Saturday’s game against Anniston. “How far did they [go]?”

Jackson said he reminds his team every day about the run Akron, a team that entered the postseason with only one win, went on last year. The Rams were the Cinderella of the 1A bracket last year and qualified for the state quarterfinals before losing to eventual state runner-up Sunshine.

Keith boys’ coach Tommy Tisdale remembers the Rams’ remarkable run like it was yesterday. Tisdale’s Bears were Akron’s first victim in the postseason last season. The Rams defeated Keith 42-40 in the first round of the class 1A, area 5 tournament, knocking the No. 2 ranked team in the state from the playoffs.

Tisdale said he probably won’t have to remind his team of that loss when the playoffs start this year.

“I don’t know if I have to do as much reminding now,” Tisdale said. “They’ll probably remind themselves.”

This year Keith is ranked No. 3 and won’t have to play a first round area tournament game because area 5 now only includes three teams. After last season, Akron and Sunshine both closed down.

That means no matter what, both Keith’s boys and girls will play in the sub-regional round of the playoffs. Tisdale said his team is taking it a game at a time, starting with Thursday night’s regular season finale against Montgomery Academy.

“We’re trying not to put the wagon before the horse,” Tisdale said.

Other teams are hoping to peak when postseason play gets underway.

Dallas County’s boys have been to Birmingham the last two seasons, but haven’t been as dominant this year after losing all of the starters off those teams.

Area tournaments start the week of Feb. 8 and run throughout that week around the state. The Times-Journal will post a complete area tournament preview, including brackets, during the next week.