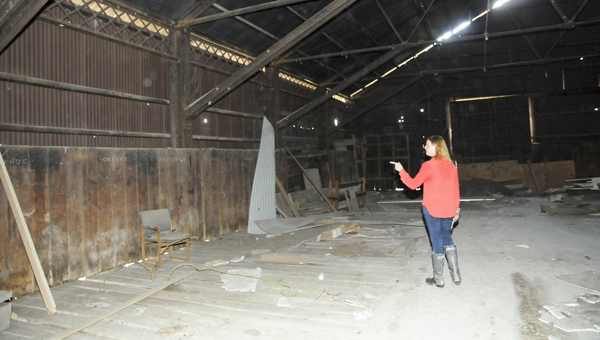 Old Depot Museum director Beth Spivey wants to save the warehouse next to the museum. The city had considered tearing down the building.

Beth Spivey, director of the Old Depot Museum, is hoping to salvage an abandoned freight warehouse that sits next to the museum.

The city of Selma has discussed demolishing the building and turning it into a parking lot for visitors of the Riverfront Park Amphitheater, but Spivey has another vision.

She believes the space would be a good place for residents of Selma to host birthday parties, family reunions and other large functions.

Spivey made a proposal at a recent city council work session to save the building.

“It can be something that is really big and not expensive to rent. I know that a lot of people can’t afford some of the buildings around here,” Spivey said. “When someone came talking about tearing it down, that’s when I knew I had to do something because it doesn’t take long to start demolition.”

Spivey asked the city council to give her two years to clean up the warehouse entirely. The building was built in 1890 and is 16,000 square feet.

In addition to a good cleaning, Spivey wants to repair the floors, roof, doors and lights.

“This building will be used to store exhibits, host events and best of all preserve our city’s history,” Spivey said.

She said that the building sits on five acres, and there would be plenty of room to save the building and create a parking lot as well.

Dr. Jerry Light, who serves as president of the Old Depot Museum, is supporting Spivey in her effort to save the building.

“When the freight warehouse was there and operating, it was influenced by all socioeconomic roots. Poor, middle-classed and working people used it,” Light said. “It represents a part of Selma and can be something everyone uses.”

Spivey will meet with Mayor George Evans and city council members Friday to further discuss what will be done with the building.