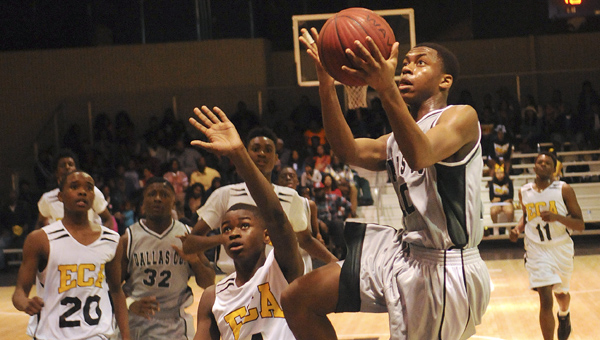 The first ever basketball meeting between Dallas County and Ellwood Christian was supposed to be about two teams still trying to find themselves with area tournament play only weeks away.

It quickly turned into a one-sided 72-31 win for Dallas County (7-11). The Hornets took an 11-point lead on a Kareem Ross layup to begin the second quarter and led by double figures the rest of the way.

“We’ve been playing a little bit better each game, so we were prepared for the game,” said Dallas County Willie Moore. “I was happy with the way we played, and we played a lot of people. We played everybody.”

Henry Baker seemed to be everywhere for the Hornets. He scored 18 points, including knocking down a 3-pointer late in the game to stretch the lead.

Ten different players scored in all for Dallas County, but Henry was the only one in double figures.

The victory gave Moore his 499th career victory. He’ll have a chance to get to 500 wins Tuesday against Billingsley in a game that starts at 12:30 p.m.

“I’ve been fortunate to have some really good players and to be at some basketball schools where they really care about it,” Moore said. “It’s not about me, it’s about the kids.”

While Dallas County was celebrating one of its most lopsided victories of the year, Ellwood Christian was trying to figure out where it went wrong. The Eagles (5-10) were never in the game Friday night.

Derrick Griffin and DeVante Sanders scored eight points to lead the way for the Eagles, who trailed 38-16 at halftime. Henry scored nine of his points in the third quarter, including a stretch where he scored six points in a row. He went to the basket for two layups and also mixed in two free throws to put Dallas County up 51-21 with 3:44 left in the third quarter.

Floyd Crusoe and Quincy Parker also knocked down shots to keep Dallas County’s lead above thirty. Henry knocked down a 3-pointer as the third quarter ended to give Dallas County a 60-28 lead entering the fourth period.

Moore said “maybe” when asked if the game could become an annual rivalry. Before this year, Dallas County and Ellwood Christian had never played in any sport. The teams met in volleyball earlier this year.

Walker said he hopes it becomes a rivalry in all sports.

“Both of us have new administrations so this could be our rival for basketball, football, and even baseball and softball,” Walker said.

Smith scored 19 points as the Hornets held off a late charge from the Eagles (0-15) for their second win of the year.

Led by Smith, Dallas County took advantage of Ellwood miscues, which led to layup opportunities throughout the game.

“I think we did a very good job in fastbreak with transition,” said Dallas County head coach Charles Thompson. “I think that’s where the bulk of our points came from.”

Dallas County played aggressively from the opening tip. The Hornets didn’t settle for outside shots on offense and only took five jump shots the entire game.

Ellwood Christian knocked down its first two shots of the game. Brianna Dower made a deep two-pointer and Shakeria White made a three, but the Eagles didn’t score again until Dallas County had rolled off 11 straight points.

The lead got as large as 43-20 in the fourth quarter before Ellwood Christian closed to within 11.

“I’m just proud of them man,” Thompson said. “I know we haven’t been winning much, but in my eyes I have seen improvement with them.”

On Tuesday, Dallas County will play Billingsley, the other team the Hornets have beaten this year.