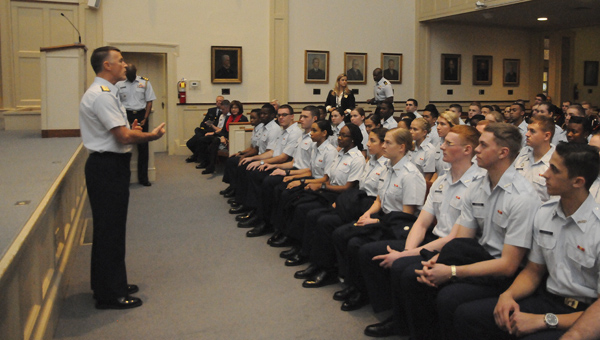 By Chelsea Vance
The Selma Times-Journal

As commandant, Zukunft leads the largest part of the Department of Home Land Security, which is made up of 88,000 personnel including active duty, reserve, civilian and volunteer auxiliaries.

In his speech, Zukunft shared some of his experiences and offered words of motivation and encouragement.

“If I can do it, any one of you who gets appointment to our Coast Guard Academy can be the one standing here several years from now in this very same position,” Zukunft said.

The commandant has dedicated 42 years of service to the U.S. and will retire in 2018. He has earned the Department of Homeland Security and Coast Guard Distinguished Service Medals, Defense Superior Service Medal, three Legions of Merit and five Meritorious Service Medals.

After he opened the floor to students with questions, he went on to present five cadets with appointment for the 2020 class of the Coastguard Academy. Four of those were from Marion Military Institute and one is from Georgia Military College.

Aaron Anthony, Travis Connelly, Molly Dolan and Caleb Patton were all ecstatic after hearing the news that they had been chosen to attend the Coast Guard Academy.

“I’m very shocked and excited at the same time. I have wanted to go to the academy for about a year now,” said Anthony, who has an ultimate goal to become an officer in the Coast Guard.

None of Marion students had any idea that they would be chosen. Three are from Maryland, while another is from New Jersey.

The cadets will start at the Coast Guard Academy in New London, Connecticut this fall. They are expected to complete the program in four years.