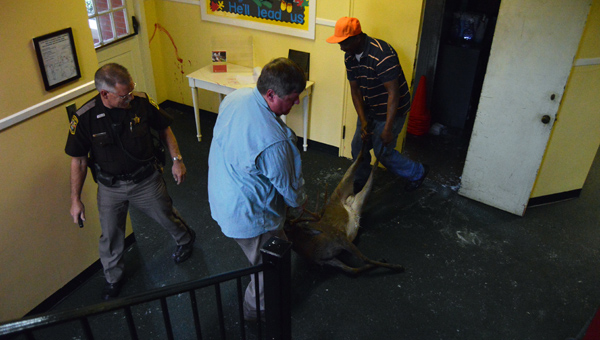 An 8-point buck is carried out of a mechanical room Friday morning at Cornerstone Presbyterian Church. The deer broke a water line and caused damage in the building.

An 8-point buck was shot and killed Friday after crashing through a window at Cornerstone Presbyterian Church.

Selma Police Department responded to the call Friday morning around 11:15 a.m. Witnesses reported seeing the deer running down Dallas Avenue before jumping through a window in the church’s educational building.

“I was sitting at that red light at the corner of Dallas and Lauderdale,” said Gary Forte. “The next thing I know he was running across Lauderdale, made one hop and jumped through that window of the nursery.” 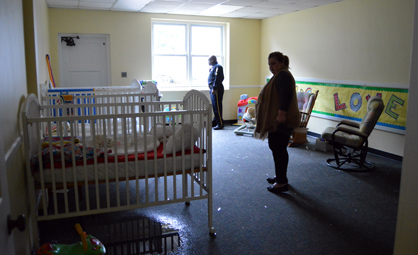 The buck crashed through a nursery window.

Selma Police Department Sgt. Harry Tubbs and church staff members corralled the deer in a mechanical room until more help arrived. Police tried to remove the animal alive with ropes but were unsuccessful.

Tubbs said law enforcement ultimately decided to put the deer down shortly after noon since it was injured and to also prevent additional damage to the church.

Church pastor Steve Burton said everyone was trying to make the best out of bad situation.

“It’s just kind of odd,” Burton said. “We’ll probably take him to the deer processor, and give him to folks who need something to eat.”

While in the building, the deer lost a lot of blood and somehow broke a water line, which caused water damage to the entrance next to the kitchen, hallways and one of the nurseries.

“We’ve got waterlines and windows broken, and everything in our mechanical room is soaked. Carpets are messed up, and blood is everywhere,” Burton said. “It’s going to take a good bit of work to get everything cleaned up.”

Burton said church staff members have already called for plumbers and other help with the cleanup. He said he is grateful for the Selma Police Department and the assistance they offered.

“They were a lot of help,” Burton said. “They showed up quickly and stuck around and helped out for the whole process.”