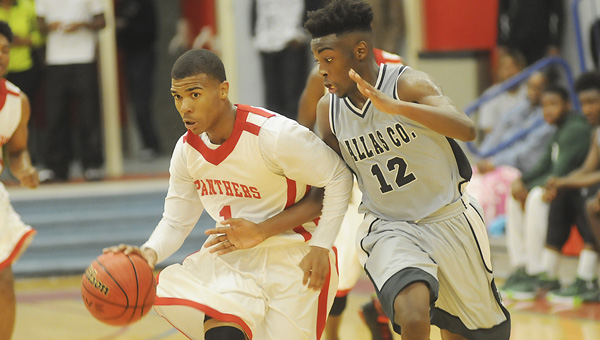 Dallas County’s Timothy Baker reaches in to try to steal the ball away from Kentavius Page during the third place game at the Dallas County Classic Tuesday. Both players had big fourth quarters, but the Panthers came out on top 42-40.

Southside’s Kentavius Page was barricaded in the corner of the court, looking for a teammate to break away from a defender’s shadow. The score was knotted up 40-40, and 10 seconds remained on the clock.

Suddenly, Lee Underwood broke free near the sideline. Page tossed him the ball in stride, and Underwood coasted to the basket for a game-winning layup.

The Southside Panthers needed every second on the clock to escape the Dallas County Hornets 42-40 in the third place game of the Dallas County Classic Christmas tournament. The Panthers were free to celebrate victory after Dallas County’s Andre Hall chucked a near-halfcourt heave bounced off the left side of the rim as time expired.

Both teams came out sluggish in the first quarter, as Southside only led 5-3 after eight minutes of play.

Hall then intercepted a pass at one end of the floor and dished the ball to Quincy Parker who completed a three-point play.

Charles Price responded for Sotuhside, as he knocked down a jump shot to bring the Panthers’ lead to 31-26. Buford answered with a 3-pointer to keep Dallas County within two points of the lead.

In the fourth quarter, Timothy Baker pushed the Hornets in front 35-33 with two 3-pointers that brought Dallas County fans to their feet.

Later in the quarter Page hit a layup to take a two-point lead, and then Baker threw up a floater that tied the game at 40-40.

With time winding down, Page found Underwood, who nailed the layup with just three seconds left on the clock.

Southside head coach Cedric Brown said he was pleased but not happy with the win, certain that his team is capable of accomplishing much more this season.

“Anytime we can get a win over anybody in the county in the Black Belt, it’s a good win for us, but this is not the end,” Brown said.

Southside was blown out by Keith Monday, but the Panthers rebounded from the loss with a 25-point victory over Dallas County.

Kionah Page led all scorers with 17 points in Southside’s 47-22 victory over Dallas County in the third place game of the Dallas County Classic Christmas tournament Tuesday.

Christina Watts nailed two 3-pointers in the first quarter to lift Southside to a 16-3 advantage at the end of the first quarter. The three points for Dallas County came courtesy of a J’Kierra Peterson triple.

Southside extended its lead in the second quarter and led 28-8 at halftime. The second half was never in doubt for the Panthers, but the Hornets’ Jorge’Undra Dower managed to score 10 second-half points. She led Dallas County with 12 points.

Hornets head coach Charles Thompson said rebounding and poor defense in transition was ultimately what caused the game to get out of hand for Dallas County.