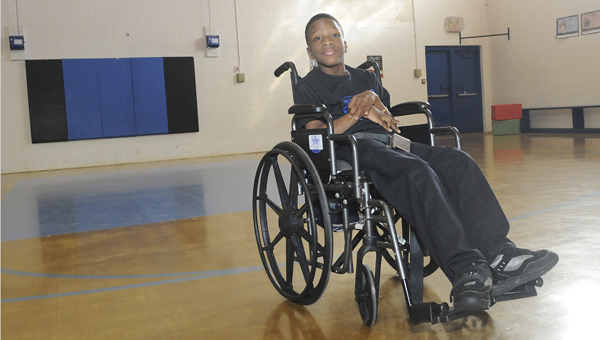 Tipton-Durant Middle Schooler Jyrah Smith poses for a picture Tuesday at the school. Smith, who has cerebral palsy, is an assistant coach for Tipton’s girls’ basketball team. –Daniel Evans

Over the last two years, eighth grader Jyrah Smith has served as an assistant coach for Tipton-Durant’s middle school girls’ basketball team. He helps the team make adjustments at halftime and stays on top of the players’ grades.

Like most great coaches, he also has a way of inspiring the Blue Devils.

Smith, 13, has cerebral palsy, and is limited to using a wheelchair to maneuver around, but he’s found a way to make a real difference for Tipton this year.

“Jyrah is a real structured young man and he keeps me in order,” said Tipton head girls’ coach Lenord Jones. “When we go to practice every day, we do the same repetition, and he makes sure everything is planned out and ready. He makes sure to keep me on track.”

Jones, who works with special needs children, is always with Jyrah on game days. He sits Jyrah’s wheelchair right beside him during games so that they can coach the team together. The two have developed a tight bond over the last two years.

“Coach Jones, he put time in with me,” Jyrah said. “He told me one day, he said ‘Jyrah, I’ve got to ask you something. He said do you want to coach basketball with me and help me out?’”

Since then, Jyrah has become an integral part of the girls’ team. He coaches at every home game and makes it to many away games depending on how far they are. Players refer to him as Coach Smith, giving him the same respect they give for Coach Jones.

During halftime of games Jyrah coaches, Jones said he and Jyrah always confer about changes they could make from the first half.

“They respect him just as much as me or more,” Jones said. “They are excited when he’s at the practice. They make sure he’s getting there. They love him.”

At times, Jyrah gives the team some extra movitation too.

“At halftime [of one game], he pulled me aside and I was like, ‘Am I doing something wrong?’” Brown said.  “And he said, ‘We need to be up more than this so these other girls can play.’”

When he’s not at the game, Jyrah still finds a way to contribute.

“He is still calling me, texting me, making sure we are doing everything in order,” Jones said with a smile. “He’s still there. I have to make sure we communicate with him in the locker room and after the game about what goes on.”

He wants to be a preacher, policeman and a coach one day and also wants to attend the University of Alabama.

“He does not see himself as different from all the other children,” Valerie said. “The only thing different is he said he can’t walk. That’s the only difference he sees in himself and they see him just like they see themselves too.”

Principal Jackie Averhart said Jyrah is a terrific student and a joy to have at Tipton.

“He’s very full of life. When you look at the obstacles that he has to conquer, versus looking at some of the other students, you’re just totally amazed,” Averhart said.

“He loves school and he’s here every day and always with a smile on his face and never complaining.”

On Tuesday night, Jyrah had a chance to coach the Tipton team by himself while Jones stayed quiet on the bench.

It was his final home game as a student at Tipton.

The school has already started working with Southside High School about Jyrah’s transition there. They’re hopeful he will be able to get involved with the basketball team at Southside too.

Given Jyrah’s spirit and determination, he will probably do well wherever he goes in life.

“He doesn’t let anything stop him,” Valerie said. “Whatever needs to be done, he wants to do it. He is very inspirational.”