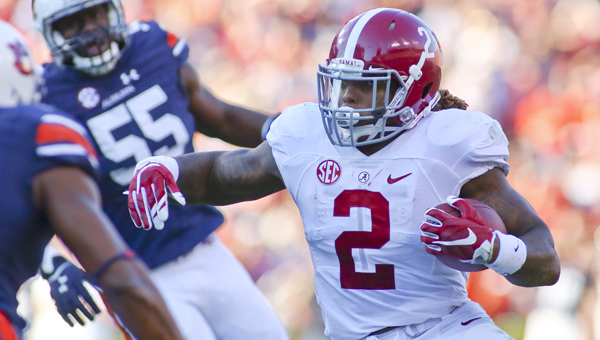 Alabama running back Derrick Henry runs around the end during this season’s game against Auburn at Jordan-Hare Stadium. Henry became the second player in the University of Alabama’s history to win the Heisman Trophy Saturday night. –File Photo

The Crimson Tide’s super-sized tailback won college football’s most famous player of the year award Saturday night, becoming just the third running back to take the Heisman in the last 16 years.

The 6-foot-3, 242-pound Derrick Henry is the second Alabama player to win the Heisman, joining Mark Ingram. Since Ingram won the award in 2009, it had gone to five straight quarterbacks.

Stanford’s do-it-all running back Christian McCaffrey was the runner-up, making it four second-place finishes for Cardinal players in seven seasons.

It was the closest Heisman voting since Ingram won by the slimmest margin ever, but still a comfortable victory for Henry. He received 1,832 points, 293 more than McCaffrey (1,539). Watson received the third-most points for a third-place finisher with 1,165.

He choked up during his speech, thanking his family, coaches and teammates, and mentioning former Alabama teammate Altee Tenpenny, who was killed in a car crash two months ago.

Henry was born to teenage parents and raised with the strong influence of his grandmother, Gladys, in the small north Florida town of Yulee, which is just outside of Jacksonville, but very much country living.

Gladys Henry has been hospitalized for weeks in Florida with heart and respiratory problems. Derrick Henry said his grandmother was with him in spirit as his childhood dream of winning the Heisman came true.

The Tide hammered away with Henry and he set a school record for carries with 339, including an astounding 90 in Alabama’s last two games against Auburn and Florida. He had four 200-yard games in the second half of the season.

Alabama placed its championship hopes on Henry’s broad shoulders and he has delivered.