Keith uses 26-0 run to get rare win in Plantersville 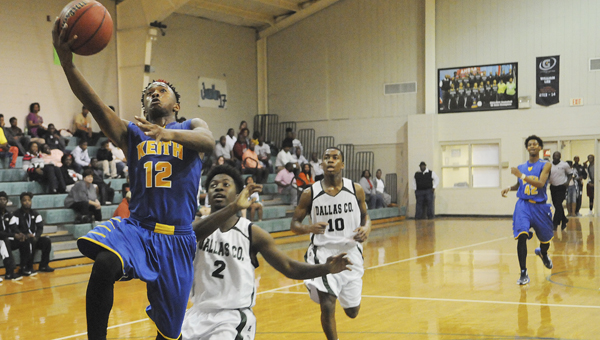 PLANTERSVILLE — Keith led throughout Tuesday’s game against Dallas County and in the process ended an incredible streak of home dominance for the Hornets.

Keith (7-2) ran the Hornets (1-3) up and down the floor early and pulled away for a 65-26 victory that handed Dallas County its first home loss to another Dallas County school in a long time. According to Hornets head coach Willie Moore, it’s the first loss to a county school during his tenure at the school, which started in 2006.

According to scores from the Times-Journal and MaxPreps during that time frame, Moore’s teams were 17-0 against county schools Selma, Southside and Keith in Plantersville since he took over the program. Several scores were missing from that decade, meaning that record could not be independently confirmed.

“On that 11 year run where we were beating everybody and beating them pretty good, I didn’t do a very good job of enjoying the moment,” Moore said. “Now that we are challenged in a lot of ways physically as a team and seeing some of our struggles, I appreciate more now the things we were able to do over the course of that time.”

From the opening tip Tuesday, it was clear that home winning streak — whatever the total is — was in jeopardy.

Keith used a full court press defense early in the first quarter and it led to easy buckets. The Bears led 15-0 after the opening quarter and ended up scoring the first 26 points of the game.

Dallas County didn’t score until the 5:57 mark of the second quarter when Floyd Crusoe knocked down two free throws. A layup by LaDarius Furlow gave Dallas County its first made field goal of the game.

Dontavius Thomas scored 17 points to lead the way for Keith. He scored 13 of those in the first half to help Keith take a 40-12 lead into halftime.

Coming off back to back trips to Birmingham for the Alabama High School Athletic Association’s state finals, Dallas County has a much more inexperienced team trying to find its footing.

Meanwhile, Keith is playing its best defense of the season. The Bears allowed under 30 points for the second straight game and dominated from start to finish.

“I thought we were going to get in the bonus early but we didn’t attack them at all. I don’t know what we shot from the field but it was abysmal.”

Mark Young had 15 points, including three 3-pointers and Morris Collins added another nine for the Bears. Henry Baker led Dallas County in scoring with five points.

The Hornets will try to bounce back when they play at West Blocton Friday night, while Keith will play at Isabella on Thursday.

On their way to the 1A state championship last season, the Keith Bears weren’t known for their 3-point shooting. Part of that is because the Bears were so dominant inside that they didn’t need to test their outside touch.

On Tuesday, they showed that’s in their arsenal too — just in case they need it at some point this year.

The Bears made 10 3-pointers and six different players made a three. Ambreya Snow made three, Shatavia Moore knocked down two and Alyshia Boone and Harriet Winchester each made one. Even forward Zykia Pettway, who rarely shoots from outside the painted area, made two 3-pointers.

“They shot it pretty good,” said Keith head coach Cecil Williams. “Just about everybody made threes. They practice it so I let them have a little relaxation and shootaround tonight. They’ve been asking for it and they shot the ball really well in the third quarter.”

Moore had 22 points to lead the Bears and Snow chipped in another 17.

Dallas County was led in scoring by Jorge’ Undra Dower with eight points.

“We have to continue to work regardless. Winning is a process and in the process there is going to be some nights where you want to just throw it all away but if it’s something you love and something you really want to do you’ve got to keep fighting,” said Hornets head coach Charles Thompson.