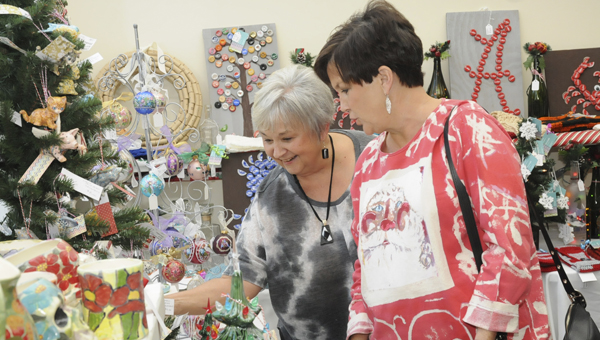 Terri Johnson, left, shows Cheryl Till some of the the unique Christmas decorations made by people in Selma at the Holiday House fundraiser at the Larry D. Striplin Performing Arts Center Monday.

Cheryl Till roamed around the Holiday House at the Larry D. Striplin Performing Arts Center with a good idea of what she was looking for. Till said she wanted to buy some pottery, anything with a University of Alabama logo and Mrs. Rushton’s homemade jam.

With 30 different vendors, the Holiday House fundraiser, in its 37th year, produces many different locally created Christmas-themed items that aid in making a house look more festive for the holidays or to just provide a tasty homemade treat. The Holiday House is open until Dec. 19 Monday through Saturday from 9 a.m. to 5 p.m. and Sunday from 1 p.m. to 4 p.m. Twenty percent of the Holiday House’s earnings go toward the Old Depot Museum.

“Most of the vendors are local people so you’re helping to support their cause too when you’re doing it,” Duncan said.

In between the locally made Christmas art decorations were decadent homemade dessert treats, including peanut butter pops, peanut butter fudge, carrot cake and pound cake. The desserts were provided by Living Waters Church Monday, and nearly each day throughout the two-week span, someone different will provide a new batch of baked goods.

Terri Johnson, who works with Duncan to organize the Holiday House, said some people will come every day to try the new treats that the food vendors sell.

Duncan said some of the new items sold this year are homemade leather belts and wallets and homemade soaps. She also said Mrs. Rushton’s jam, which is well-known in Selma, is selling its new Peach Jalapeno jam.

Duncan has been a part of the Holiday House since its beginning, serving as either a vendor or an organizer each year. She said part of what makes it enjoyable for her is seeing all the familiar faces come in to shop.

“I get to see people I hadn’t seen all year,” Duncan said. “That’s always nice.”

As Johnson walked around the Performing Arts Center showing Till some of the new items being sold at this year’s Holiday House, Till’s face lit up.

There’s something special to her about the items being sold at the Holiday House that distinguishes it from the items at other stores.

“They’re special knowing someone here in Selma made them,” Till said.

Mark Peterson is working to buy the St. James Hotel from the city of Selma and has been working as... read more