Griffin scores 16 in second half to lead Ellwood to win 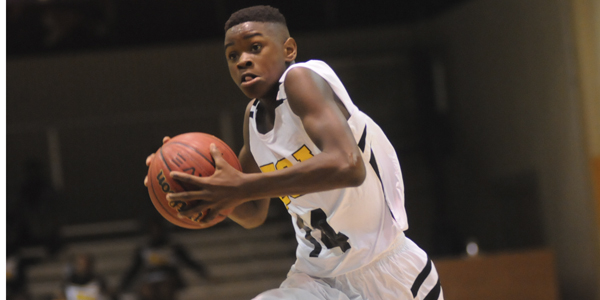 Ellwood freshman Derrick Griffin drives the ball down the court during a game against A.L. Johnson Friday at home. Griffin scored 16 second half points as Ellwood defeated A.L. Johnson 57-55.

Freshman Derrick Griffin raised his fists in the air with triumph as players and fans celebrated around him Friday night on the gym floor of Ellwood Christian. Griffin didn’t score a single point in the first half, but he more than made up for it in the second half.

Griffin scored 16 second-half points to lift the Ellwood Christian Eagles (2-2) past the A.L. Johnson Eagles 57-55 in a game that was up for grabs throughout the entire second half.

“His name is going to be in lights one day,” said Ellwood head coach Darrell Walker of Griffin.

“If he just stays humble, keeps working hard. He’s leading us. We’re going as far as he’s taking us.”

Ellwood raced out to a 7-1 lead, thanks in part to a 3-pointer from Anthony Woods. Ja’Mel Phillips made the crowd roar with a thunderous dunk to put Ellwood in front 9-1. Ellwood maintained a lead throughout the first half, holding a 24-22 advantage at the midway point.

Griffin hit a layup early in the third quarter, stole the ball and dished to Woods for a layup to give Ellwood a 29-24 lead. Following a Griffin layup that put Ellwood up 33-26, A.L. Johnson went on an 8-1 run to pull ahead for the first time in the game with 3:23 remaining in the third quarter.

Ellwood trailed 41-38 at the end of the third quarter.

Griffin made a layup early in the fourth quarter to bring Ellwood within one at 41-40. Later in the quarter, Griffin rose above defenders to tip in a missed free throw and tie the game at 46-46. He followed it up with a steal and a subsequent layup to put Ellwood ahead once again 48-46.

A.L. Johnson knocked down a 3-pointer to reclaim the lead at 51-49. Ellwood trailed 53-50 when Christopher Caldwell ripped down a rebound and made a layup to pull Ellwood within one point with time running out.

When A.L. Johnson took a 55-52 lead, Rayshawn Simmons responded for Ellwood with a layup.

Phillips made a layup while getting fouled with under a minute to play, pushing Ellwood ahead 56-55. A.L. Johnson was called with a technical foul, and Griffin made a final free throw to give Ellwood a two-point cushion.

“That’s the way to keep fighting in a big-time fight like that,” Walker said to his team after the game.

A.L. Johnson had one more possession to tie it, but Ellwood’s defense hung tough and got the victory over an A.L. Johnson team that made the class 1A state semifinals last year.

“I’m just happy for all my guys who stepped up and didn’t let the game get bigger than them,” Walker said.

The Ellwood Christian Eagles (0-4) came into Friday night’s home game against A.L. Johnson searching for their first win of the season. They came out with a performance that was not at all what head coach James Spears had hoped for.

“We haven’t won a game, but this is by far the worst game we have played to date,” Spears said.

Ellwood was in the game early, trailing just 10-5 at the end of the first quarter. After A.L. Johnson knocked down a 3-pointer to take a 16-5 lead with 6:03 to go in the second quarter, Ellwood had to try to play catch-up the rest of the night.

Brianna Dower made a layup midway through the second quarter to narrow the deficit to 18-7.

As A.L. Johnson continued to score, Ellwood struggled to find its offense. A 3-pointer from Shakeria White late in the second quarter cut A.L. Johnson’s lead to 26-10.

The third quarter played out much like the first quarter. Ellwood was only outscored by five points in the third quarter, but once again struggled to find offense.

Dower connected on a layup as time expired in the third period as Ellwood trailed 43-19 with one quarter to go.

Dower started out the scoring in the fourth quarter for another layup, but that was all the scoring Ellwood was able to contribute for the rest of the game.

Ellwood’s boys and girls teams will play at home against R.C. Hatch Saturday. Both teams lost at R.C. Hatch earlier this season.