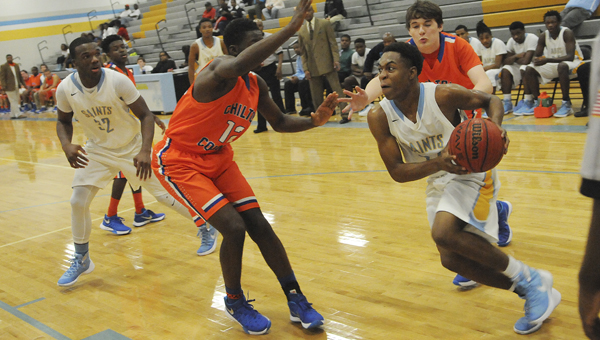 Selma’s Quentavious Davis drives the baseline during Tuesday’s game against Chilton County. Davis scored 20 points to lead all Saints and also knocked down a game winning 3-pointer as time expired in double overtime to give Selma the win.–Daniel Evans

Quentavious Davis knocked down a 3-pointer in double overtime to help Selma (5-2) escape Tuesday night’s area opener against Chilton County with a 60-57 win.

Davis held the ball for over 35 seconds, allowing the time to tick off in a tied game. With just under five seconds left, he dribbled to his right and launched a three, which stripped the net as time expired. Compared to most games at Selma High, a small crowd was in attendance Tuesday, but many of those who were rushed the court and celebrated with Davis after the shot went in.

“We wanted him to come off a high screen really, but I guess time was running out,” said Saints head coach Woodie Jackson. “Normally you want to try to shoot the ball with five or six seconds left. That’s what we told him. It didn’t come out like that, but we’re still happy and blessed.”

Both teams had several chances to put the game away.

A 10-0 run before halftime gave Selma a 27-17 lead going into the half.  Kentravious White hit back-to-back 3-pointers to end the run, giving the Saints all the momentum going into the locker room. He made a total of six 3-pointers in the game.

Chilton County answered with a 10-0 run coming out of the break to tie the score and to set a tone for the second half.

“Chilton County made the shots they had to and we missed them when we had to miss them,” Jackson said. “Then we ended up making the one that we needed to make. We are glad to win.”

Neither team led by more than five the rest of the way and Chilton had a 38-37 advantage after the third quarter.

The teams traded free throws in the final seconds of regulation with Selma’s Loveless Craig knocking down the final freebie to send the game into overtime.

In the first overtime period, Chilton County led after a 3-pointer, but the Tigers turned the ball over on their next two possessions.

With the game on the line, Davis answered with a hard drive to the basket that resulted in an old-fashioned three-point play, giving Selma 51-49 lead with 10.6 seconds left.

Chilton’s Damian Wilson was fouled on the ensuing possession and knocked down two free throws with 1.6 seconds left to send the game into double overtime.

In the second extra session, Chilton again quickly took the lead with free throws. Selma’s Kiwansis Jones tied the game at 55-55 on a layup.

Chilton responded with two free throws by Austin Hatch and then managed to force a missed shot from the Saints on the other end of the court. Following the rebound, the officials called a technical foul on the Tigers for unsportsmanlike conduct, giving Selma new life with 49.8 seconds left.

Davis, who led Selma with 20 points, knocked down both technical free throws to tie the game once more.

After Chilton missed, the Saints gave the ball to Davis and let him create against the Tigers’ man-to-man defense. As time ran out he knocked down the three and helped Selma move to 1-0 in class 6A, area 6 play.

The Saints will play at Keith on Friday night in a rematch from each team’s season opener. Keith won the first matchup, but the Saints will enter Friday’s game on a four game winning streak.

If the Selma Saints (7-0) are going to accomplish what they hope to this season, the first goal is to win class 6A, area 6.

On Tuesday night, the Saints took the first step in that journey with a 60-23 win over Chilton County in each school’s area opener.

“I got a chance to play everybody tonight and we looked pretty decent,” said Selma head coach Anthony Harris. “We’ve got to put them in the heat sometimes and tonight we got to see some folks that may can help us down the road.”

Ten Saints players scored in the game, led by 11 from Aaliyah Hatcher.  Jamya Smith and Areyana Williams also poured in 10 points each. Smith hit two 3-pointers and Williams, who always fills the stat sheet with her hustle plays, seemed to be everywhere.

Williams started the scoring with a three-point play off a fastbreak opportunity. Not long after Smith knocked down a three and Jacqeutta Dailey added a second three-point play to put Selma up 13-4.

By the time the first quarter was over, Selma was up 21-4 and the Saints starters sat the rest of the first half.

With the starters out, younger Saints got some game action, which Harris hopes benefits the team down the road.

Selma’s lead was trimmed to 30-15 at the half, but the Saints opened it back up once the starters took the floor again in the third quarter.

Selma outscored Chilton 24-5 in the third quarter to put the game away.

Selma has five more area games to go, including playing all three area opponents on the road.

“We’re going to play Chilton, Hillcrest and Paul Bryant down the road and that’ll let us know what we’re made out of,” Harris said.

The Saints will play again Friday at Keith, a team they defeated in their season opener.