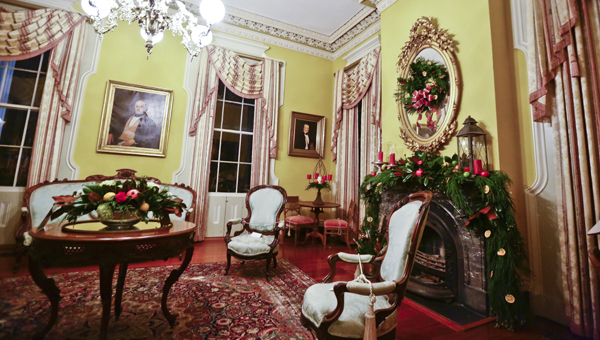 Sturdivant Hall’s Christmas decorations replicate those that would have been used in the 1800s, including candles,
greenery and fruit.

By JUSTIN FEDICH |  Selma The Magazine

A gate opens to Sturdivant Hall Museum, with a lone wreath and garland hanging from the door. There are no store-bought Christmas lights strewn around the outside of the building. Lanterns line the hedges leading up to the entrance. 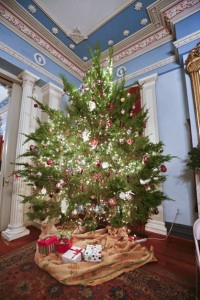 There isn’t too much of a show outside the 10-room, 6,000 square-foot Sturdivant Hall Museum to let people know it’s Christmas during the holidays. Inside the building, however, the Christmas decorations are a sight that bring people from all around Selma and other areas for a visit.

There’s one unique aspect of the Christmas decorations that make them stand out from most other houses around the holidays.

As extravagant and detailed as the decorations look afterward, the Christmas decorating committee spends only one day putting together the decorations.

This year, the decorations are going to be set up Wednesday, Dec. 2. A Christmas gala for the Sturdivant Museum’s membership will be held Thursday, Dec. 3. The museum will then hold an open house for the general public Friday, Dec. 4 and Saturday, Dec. 5.

Burk said she enjoys the day of decorating the museum, but it can be a little stressful to finish in just one day. The decorating committee made up of about five members solicits help from people throughout the community to help with the undertaking.

“It’s a good time and everybody likes to see the creativity of the other,” Burk said. “You have it formed in your mind what you want to do, but it’s always nice to see what someone else is doing and how creative they are.”

All the decorations, from the greenery to the fruit, come from nature. Burk said that’s what makes the museum a popular holiday destination.

“That’s the important part,” Burk said. “Back in the day, they didn’t have a florist to go to buy their stuff, so they took things off the land.”

Every decoration, aside from the Christmas lights on the Christmas tree, is either live or dried. Greenery is draped over the staircase and fireplace, one of the touches that adds to the beauty of Sturdivant Hall during Christmas.

While decorating Sturdivant for Christmas is an age-old tradition, there is a new attraction this year.

An old Victorian sleigh in the carriage house has never been used when people have come to visit for Christmas in the past, but this year it will be available for visitors to take pictures with.

Burk said that the sleigh will be decorated and can be a great way to have the perfect picture for a Christmas card.

“I think the sleigh is going to be a really nice added feature this year,” Burk said.

Inside the house, taking pictures hasn’t been encouraged in the past. But Sturdivant Hall director Mary Hansell said she will often allow visitors to snap a photograph or two because it’s often the first thing that people think of doing when they see the beautiful decorations.

“Everybody wants to take pictures,” Hansell said. “We let them take a few pictures of the decorations of the house.”

Burk said her favorite part of decorating Sturdivant for Christmas is the party on Thursday night for the members.

“It’s kind of just a fun relaxing party with members and it’s just easy,” Burk said “It’s different than a big party where you have to worry about other things. Once you’ve done the work Wednesday, you’ve put your work in and now you’re just a guest and can enjoy the home.”

During the Thursday party, members are accompanied with live music and refreshments.

After Thursday night’s festivities, the museum gives the public a chance to enjoy the decorations. In addition to the inside of Sturdivant and the Victorian sleigh, there is a gift shop that welcomes all who attend.

Burk and Hansell are hopeful to have another big crowd this holiday season.

Burk said there is something special about decorating a building that has been standing since 1856 the old-fashioned way.

“Most people nowadays use an artificial Christmas tree,” Burk said. “Here, everything is like old world. It’s like old school, the way it used to be. To me, it’s less commercialized and it’s just more natural and enjoyable.”