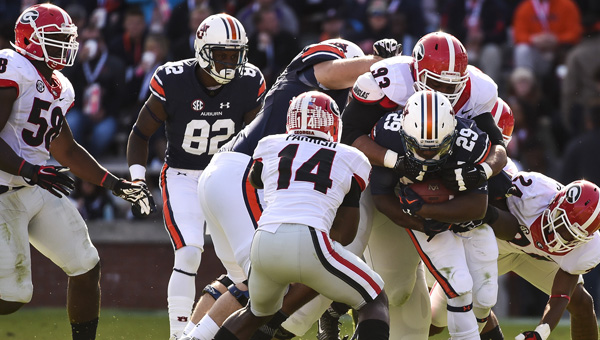 Auburn running back Jovon Robinson is tackled by a hoard of Georgia defenders. The Tigers lost to the Bulldogs 20-13. — Zachary Bland | Auburn University Athletics

AUBURN (AP) — Isaiah McKenzie, Aaron Davis and Georgia’s defense took the game — and the ball — into their own hands.

McKenzie returned a fourth-quarter punt 53 yards for a touchdown Saturday to lift the Bulldogs to a 20-13 win over Auburn in a battle of the Southeastern Conference’s preseason division favorites.

“He (Kevin Phillips) outkicked his coverage and like Coach told me all week, ‘If you get a pitch to hit, take it,’” McKenzie said. “My teammates had great blocks, I got around the corner and scored a touchdown.”

Georgia (7-3, 5-3) forced two fumbles after that, including one on the goal line in their SEC finale.

Davis wound up with the ball both times.

The Tigers (5-5, 2-5) managed only two Daniel Carlson field goals after their opening drive, the second coming with 1:14 left to play when the Bulldogs kept Auburn from the end zone.

Georgia’s Malcolm Mitchell recovered the onside kick to settle a game when both offenses had more fizzle than sizzle.

Auburn remains last in the SEC West after opening as a popular pick to win the league with quarterbacks Jeremy Johnson and Sean White both struggling.

McKenzie also scored the tying touchdown on a 4-yard run late in the third quarter for his first career offensive score. Then he tied Georgia’s career mark held by Buzy Rosenberg with his fourth career TD on a punt return.

Greyson Lambert was held to 97 passing yards for Georgia, which stalled in Auburn territory on its first three drives. Sony Michel gained 77 yards on 26 carries.

The Bulldogs’ defense, though, forced three turnovers and held the Tigers’ two quarterbacks to 62 yards passing in a game where neither team produced 300 yards. Auburn gained 275, Georgia 243.

Auburn led 10-3 at halftime but managed just one first down in the third quarter.

“Obviously in the second half, we didn’t get it done,” Auburn coach Gus Malzahn said. “Uncharacteristically, we had the three turnovers. We’d been protecting the ball extremely well. Three turnovers are big.”

With both offenses sputtering, the game turned on big plays by Georgia’s special teams and defense.

McKenzie fielded the ball, made a couple of cuts and darted to the end zone with 9:28 left for a 17-10 lead.

Two plays later, Jordan Jenkins jarred the ball loose from White, who had come off the bench. Davis fell on it at Auburn’s 17 and Marshall Morgan made it a two-score game with a 38-yard field goal after the offense went backward.

“It’s just an over-intoxicating feeling,” Jenkins said. “You just have so much joy and so much excitement, so much energy over the way we played. It makes up for some of the pains we’ve had throughout the season.”

The Tigers then mounted their best drive since the opening possession behind starter Johnson, moving all the way to the 5. Then receiver Ricardo Louis got the ball on an end around, reversed field and turned toward the end zone.

Lorenzo Carter forced a fumble and Davis won the goal-line scramble for the ball.

Johnson was 14-of-22 passing but produced just 61 yards. He also threw an interception in Georgia territory after throwing a short pass to Tony Stevens well above his reach but said the switch-up with White didn’t bother him.

“That was the game-plan, to play us both,” Johnson said. “I knew I was coming out. There wasn’t any confusion.”

Hobbled by a knee injury, White’s only completion in five attempts went for 1 yard.

Carlson set an Auburn record with his 13th and 14th consecutive field goals. The previous mark was 12 by Jaret Holmes in 1997. 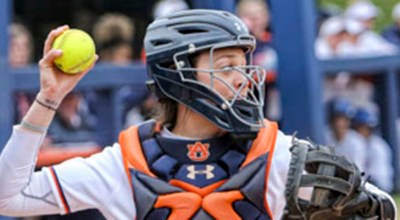 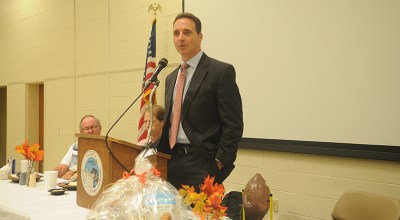 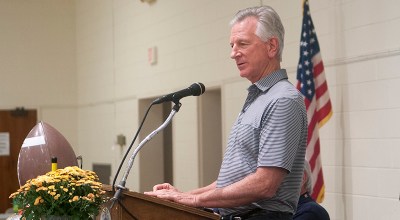