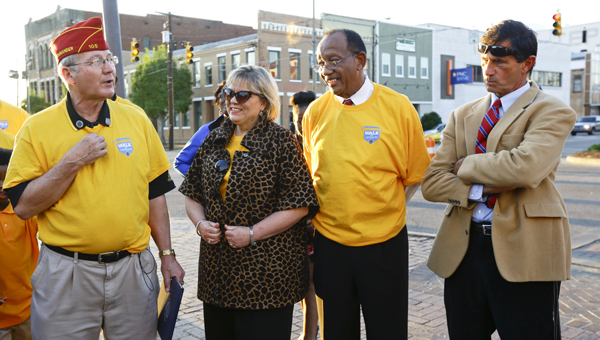 The National Commander of the American Legion Dale Barnett visited Selma Wednesday to lay wreaths at various locations in Selma and end the day with a Walk for Veterans.

The local posts, 324 and 20, combined efforts to bring the commander to Selma on Veterans Day.

“The past three days I’ve been here in Alabama, and this was one of the places that I thought would be significant to march and walk for veterans, and that’s the event that we have today, to bring attention to what the American Legion does in their communities,” Barnett said. “Also today was a special message as we shared with the curator at the cemetery and some of the monuments and how the American Legion was instrumental in the Civil Rights Movement.”

Before Barnett and other veterans began their walk down Water Avenue and back and across the Edmund Pettus Bridge, Mayor George Evans thanked him for coming to Selma and read a proclamation announcing the city council’s support of the American Legion’s Walk for Veterans.

“We’re just happy to see the turnout of people and the enthusiasm of membership and the pride that they have in the community here in Selma,” Barnett said.

“What I want to convey is that the American Legion, we’re uniters. We try to bring all people together.”

Benson Webb, commander of post 324 in Selma, said he was happy to be a part of Wednesday’s events and to have the national commander in town.

“We got an opportunity to walk with the commander to highlight the fight of veterans all across this country, and I’m so happy and delighted that we had the opportunity to participate because we got to come together as one in order for our voices to be heard,” Webb said.