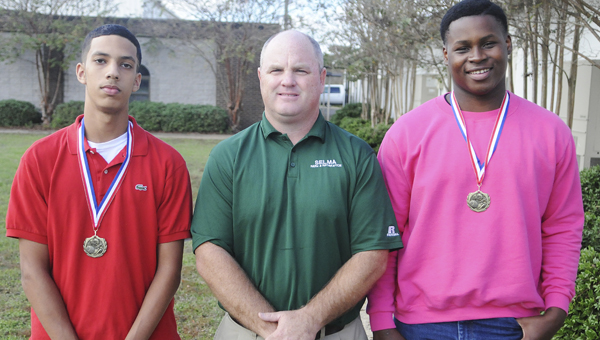 The players were awarded medals Tuesday by Trojans’ head coach Lebo Jones recognizing the achievement. Dabit and McGuire were key contributors on a Meadowview team that went 6-2 and hosted a state semifinal game.

“I wasn’t expecting it,” Dabit said. “The whole league, it wasn’t really a defensive league but out of the good defensive players, they were really good. To be up there, I was really surprised my name was in the mix for all that.”

Dabit is a junior who initially joined the team to be the Trojans’ kicker, but eventually transitioned into a defensive star.

“He wanted just to kick to start off with and then he came out started practicing with us and started enjoying football, and he’s just got a natural instinct,” Jones said. “He’s always around the football. Some kids have it and some kids don’t. He has that ability to always be around the ball and he makes a lot of tackles.”

McGuire, a senior, played running back for Meadowview and led the team in touchdowns, but was honored for his defensive ability.

Jones said there wasn’t a better running back in the state than McGuire, but that he was just as much of a difference maker on the defensive line.

He said McGuire’s pass rushing ability made him a nightmare for offenses.

“He was a real good defensive lineman as well,” Jones said. “Real big and strong and people ran away from him. He was real good at putting pressure on the quarterback too. He was one of the best defensive linemen in the state too. No doubt.”

Meadowview had its best football season since 2007 in the school’s’ first year playing 6-man football.