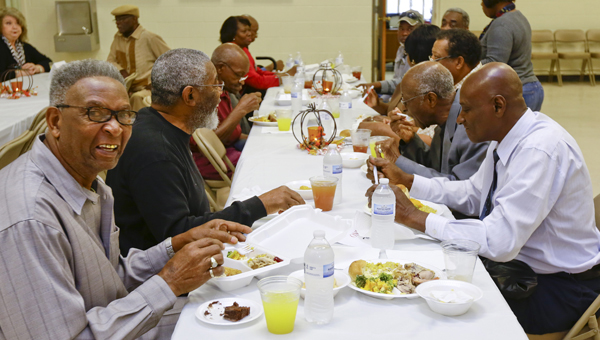 City of Selma retirees and employees were honored Tuesday during a luncheon at the Carl C. Morgan Convention Center.

The city of Selma held a Thanksgiving luncheon Tuesday at the Carl C. Morgan Convention Center for all of its past and present employees.

Among them were around 20 retirees who made their way to the gathering for food, fun and an all around good time.

“I love it because I get to see everybody and talk to people and see what’s going on, catching up with people,” said Jeanne Anderson, a former employee in planning and development who retired in 2005. “The whole city, everybody’s like family. It’s like seeing family members at Christmas and Thanksgiving.”

Mayor George Evans said he started this luncheon eight years ago to let the employees and retirees know that he and other city leaders appreciate them.

“I just like to let them know we appreciate them. We pay them a salary, and the salary they receive certainly isn’t what they deserve. They worked hard for our city, and they did a good job in the city. I do appreciate the work they’ve done,” Evans said.

Selma Fire Department retiree Fred Chaney said this was the first luncheon he has attended, and he was glad he made the trip.

“Today was a beautiful day. I enjoyed everything and meeting a lot of people I haven’t seen in years,” Chaney said. “It’s good to be here. I just enjoyed today, being here and talking to the police and firemen and city workers.”

Sam Baynes, who retired from the city cemetery department, said it was more like a family reunion than a city luncheon.

“It was nice coming back. I enjoyed it,” Baynes said. “It’s real nice to see everybody again and be with the friends. It’s really like a family reunion. I enjoyed it.”