The Selma Police Department is mourning the loss of one of its three police dogs, Nero. 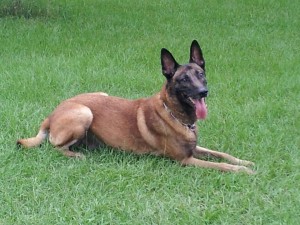 The Belgian Malinois, who has been with the department since January 2012, died of cancer Saturday.

“Nero was a very good dog that did his job and was a good family member at home,” said Sgt. David Massey, Nero’s handler.

“When you socialize with these dogs they get to know you, and you get to know them. It’s almost like a family member. It’s like another child you’ve got at the house. They become one of your kids.”

Nero, who was a dual-purpose police dog, worked his last shift Friday night.

“We had a detail Friday night. We actually did some narcotics work and stopped an 18-wheeler,” Massey said. “He actually searched the whole truck and everything. We were in and out of the trailer, under the trailer. I just let him do his thing.”

Massey said Nero had been sick for a while, but he still had a desire to work and was still healthy enough to perform his duties.

“You saw it in him … they love to work and they love to please their handler, so they’re going to do whatever they’ve got to do,” Massey said.

“He’d get up slow every once in a while, but once he got up and got going, he was ready to go.”

During his nearly three years with the department, Nero has helped get drugs off the streets and make several arrests.

“He had five apprehensions. None of them were bites because every one of them gave up,” Massey said. “He got a lot of street dope off the street, and we put a few people in jail with him. So he did his job; he did his part.”

While some departments keep their dogs in kennels at work, Nero went home with Massey and was like a part of the family.

“Wherever I’m at — that was where he was at, so you get pretty used to them being around,” Massey said.

Whether it was tracking down a suspect or sniffing out drugs, Massey said Nero could do it all.

“Nero was outstanding at tracking,” Massey said. “He was extremely good with his bite work, very obedient. He was good with his narcotics work too. The good thing about Nero is that he was good at a little bit of everything.”

The bond Massey shared with Nero was something special.

Drago, who is also a dual-purpose dog with the Selma Police Department, was set to retire this week, but due to Nero’s death, he will stick around just a little while longer.

Police Chief John Brock said Drago will be retired in December, leaving the department with just one K-9, but he is hoping to have two new dogs in January.

Brock said having police dogs makes a huge difference in the department. The department’s two new dogs will come from a K-9 school in Northport.

By Justin Fedich | The Selma Times-Journal The YMCA of Selma-Dallas County will soon play their youth soccer matches in the... read more