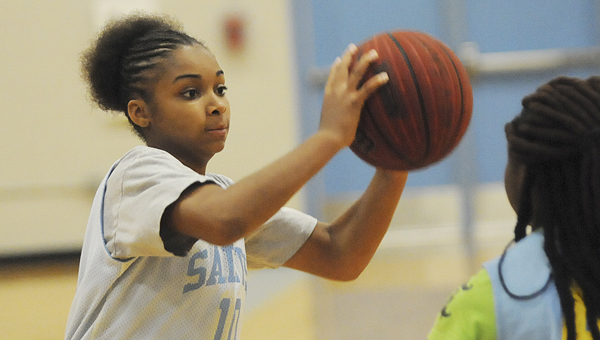 Selma’s Jamya Smith looks for a teammate to pass to during the Saints’ practice Tuesday. Selma has a few more weeks to prepare for the season before opening its first game at home against the defending class 1A state champion Keith Bears Friday, Nov. 13.

The Selma girls’ basketball team has moved on from its loss in the central regional championship last season. Head coach Anthony Harris is already motivating his team for another playoff run.

“You’ve got to give up something to get something,” Harris said to his team after practice Tuesday.

Harris is determined to bring his team further than the class 6A quarterfinals, where the Saints ultimately fell last season. With 16 players currently on the roster, Harris believes there aren’t many positions of weakness on his team.

Harris said his team will be smaller than it was last year, but his players will be quicker. He intends to play a more fast-paced game.

Even though Harris only has two seniors on his roster, he said the team still has good leadership. During practice Tuesday, each player was speaking up and communicating with each other as they ran various plays on the court.

Harris said that returning players Jacqeutta Daily, Areyana Williams, Kyandra Lewis, Charmekia Moore and Jamya Smith should all play a big role this season. But there are also a handful of newcomers this season.

“That’s my biggest challenge right now is getting them to understand what we really want out of this program,” Harris said. “I think that with the nucleus of kids we have, we can make it happen.”

Harris said he intends to make one more roster cut to scale the team down to 15 players before the season begins. Selma’s first game is at home against Keith on Nov. 13. Harris knows his team has to be at its best against the reigning class 1A Keith Bears, but he’s not rushing the progress of his team.

“We’re just going to be patient and continue to work,” Harris said.

While the season is still roughly two and a half weeks away, the coaches are already preparing the players mentally and giving the Saints the confidence that they can accomplish anything this season.

Assistant coach Melissa White urged the players after Tuesday’s practice to get better and stronger by working hard outside of the gym on their own time.

“Some of the best ball players are not in the league,” assistant coach Melissa White said to her players.

Selma’s roster may look a little bit different this year, but the Saints have been a model of consistency over the past decade. Harris is confident that whatever challenges arise this season, Selma will be able to overcome.

“If I can put them together and make all of them think as one, then we’ll be alright,” Harris said.