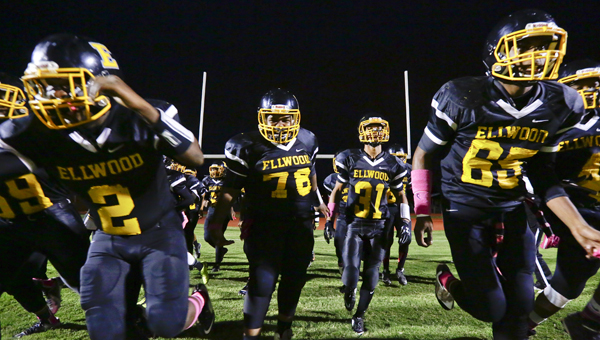 Ellwood takes the field in an Oct. 2 game against Linden at Memorial Stadium. The Eagles are back at home Thursday for the first time since that game to take on A.L. Johnson in a class 1A, region 4 game that decides the playoff fate of both Ellwood Christian and Keith High School.

The playoffs don’t officially start until November, but Ellwood Christian’s game against A.L. Johnson might as well be one.

Ellwood head coach Trey Pike said he’s been preaching to his team to just get in. Technically, Ellwood has more to play for since A.L. Johnson makes the playoffs regardless.

Still, Pike has no doubt A.L. Johnson will give Ellwood its best shot Thursday.

“Whoever can hold on to the ball and play the best defense is going to have a chance to win this game,” Pike said.

A.L. Johnson comes into this game off two big losses to region opponents No. 4 Linden and No. 1 Maplesville. In those two defeats, A.L. Johnson was outscored a combined 91-6.

Ellwood has lost five straight games after getting off to its best start in school history. Pike said his team’s tough schedule has prepared Ellwood to succeed against A.L. Johnson.

“As a whole, I would put our schedule against anyone in 1A at this point,” Pike said.

A.L. Johnson’s lone win of the season came against Keith on Oct. 2 while Ellwood’s biggest loss was against the Bears on Sept. 17 when Keith dealt Ellwood its first defeat of the season in a 58-6 blowout.

“Keith came in with absolutely nothing to lose, and they played perfect and we did not,” Pike said. “And it is what it is at the end of the day. I do think that took a little gas out of our players and a little wind out of our sails at that time and it was kind of a reality check.”

Now, Ellwood decides Keith’s playoff fate based on how it plays against A.L. Johnson.

Pike said he’s noticed on film that A.L. Johnson has a couple of players who could disrupt Ellwood’s bid for a playoff spot.

“They’ve got two kids, their motors never stop,” Pike said. “Anytime you play against teams that have players like that, there’s always potential for problems.”

Pike said that his players were in the same position last year and they succeeded to make the playoffs. Still, he’s reminded them over and over again of the importance of the game, hopeful that his team can come together to win its first game since Sept. 11.

“If we come out, take care of our assignments and what we need to do, I think we’ll set ourselves up with a chance,” Pike said.

Dallas County is the only area team that comes into this week with a playoff spot already clinched. The Hornets sit at fourth in the class 5A, region 4 standings and have a chance to build some momentum with a program-defining win over the region-leading Demopolis Tigers.

The Tigers’ lone loss of the season came to undefeated class 5A, region 1 Jackson. Demopolis is riding a three game winning streak and is coming off a 53-8 win at winless Wilcox Central.

Morgan took fate out of its own hands when the Senators lost at home last week to Fort Dale 28-20. Fort Dale can lock up the fourth playoff spot with a win over Pike Liberal Arts, a team that is 1-4 in Alabama Independent School Association class AAA, region 2.

If Fort Dale loses that game, Morgan gets into the playoffs with a win at Hooper. The Hooper Colts are winless this season and have allowed over 40 points in each of their last two contests.

Last season, Morgan’s lone win of the season came against Hooper. This will only be the Senators’ third road game of the season.

Keith plays class 1A, region 3 opponent Loachapoka in a game that does not hold significance as to whether or not the Bears get into the playoffs. Keith’s playoff chances rest on whether or not Ellwood wins its game against A.L. Johnson, but this game can go a long way in giving Keith the momentum it needs going into the playoffs should Ellwood stumble against A.L. Johnson.

The Bears stopped a three game losing skid with a 38-7 victory at Isabella last week. Loachapoka comes into Orrville off three straight losses.

The Panthers are out of the playoff race, but they are back at home for just the second time this season and the first time since Aug. 29. Southside hosts its homecoming against W.S. Neal, a class 4A, region 1 team that has locked up a playoff spot.

In the Panthers’ last home game, they defeated Keith 38-32 in overtime. Since that game, Southside has lost five of its last six games and has fallen to last place in the class 4A, region 1 standings.

Selma is mathematically eliminated from playoff contention while Northridge has locked up a spot in class 6A, region 4. The Saints are coming of a bye week following a 59-0 loss at Bessemer City.

The Saints have been on the road for five of their eight games so far this season. This will be Selma’s first home game since Sept. 18.