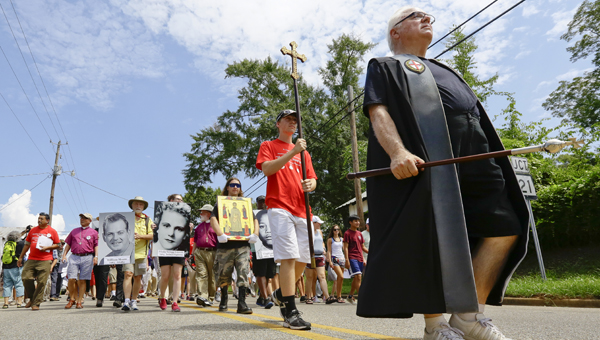 The population of Hayneville more than doubled Saturday as hundreds gathered outside the Lowndes County Courthouse to honor those who died in the fight for civil rights.

The Episcopal Church in Alabama’s Commission of Race Relations, the town of Hayneville and the Lowndes County Commission sponsor the annual event to remember Jonathan Daniels and other civil rights martyrs. 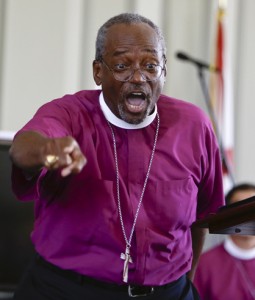 The 2015 pilgrimage, which marked 50 years since Daniels was killed, saw a record crowd.

In March 1965, Daniels, a 26-year-old from New Hampshire, answered the call from Dr. Martin Luther King Jr. for students and clergy to come to Selma to take part in the voting rights march to Montgomery.

After returning to seminary for final exams, Daniels came back to Alabama in July, where he worked to register voters, tutor students and help the poor. He also met Morrisroe though politician and civil rights leader John Lewis.

On Aug. 20, 1965, Daniels and Morrisroe as well as 20 other protesters had just been released from a six-day stay in the deplorable Lowndes County Jail after picketing a whites-only store in Fort Deposit.

Daniels and Morrisroe walked with two black teenage girls to nearby Varner’s Cash Store, one of the few places that would serve nonwhites, to buy cold drinks for the group.

The four were met at the store’s entrance by shotgun wielding volunteer sheriff’s deputy Tom L. Coleman. He threatened the group and pointed his shotgun at 16-year-old Ruby Sales.

Daniels pushed Ruby to the ground, taking a full shotgun blast to the chest and stomach. Morrisroe grabbed the other girl, Joyce Bailey, and ran, but he too was gunned down in the lower back.

Morrisroe survived after an 11-hour surgery in Montgomery; Daniels died instantly on the store’s front stoop.

People came from as far away as Alaska and the Virgin Islands for Saturday’s ceremony presided over by the Episcopal Church’s presiding bishop-elect Michael Curry. Overflow crowds watched a live stream of the service from tents on the courthouse lawn.

Curry spoke about God using regular people like Noah and Moses as well as contemporaries like Jonathan Daniels in a movement bigger than the sum of the parts.

Curry told the pilgrims they each have a role to play in moving that movement forward.

“We were not baptized into church membership. We were consecrated into radical discipleship in the Jesus Movement to change this world,” Curry said. “It is not enough to simply commemorate what they did … our task is to keep the movement going.”

Part of that includes passing the torch to a new generation.

“We must raise up a new generation of young men and women. The youthful energy that fueled the civil rights movement and did more to change the course of the nation … that march will continue,” Curry said. “That movement must go on. So, we will not stop.”

All of the individuals were killed in Alabama between December 1947 and January 1966.

In addition to the courthouse program, pilgrims walked the few blocks to the old Lowndes County Jail and what used to be Varner’s Cash Store. Along the way, scriptures were read, spirituals sung and prayers were given. Bishop Curry’s tour of the Black Belt will continue Sunday. He will preach at the 10 a.m. service at St. Paul’s Selma.