Air conditioning units to be installed at St. James 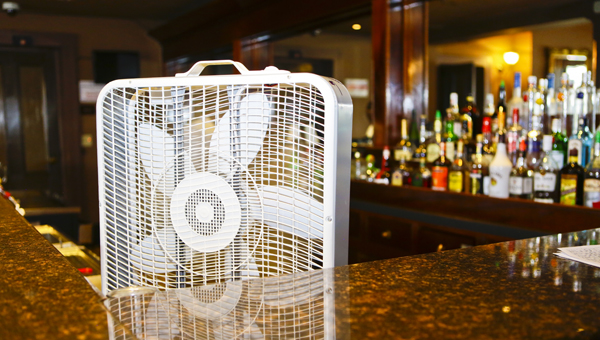 Fans have been installed in common areas of the St. James Hotel to help cool the downtown landmark.

The dog days of summer are still ahead of us, but those hot days will be much cooler for guests at the St. James Hotel thanks to two new central air conditioner units.

The hotel has experienced problems with its air conditioning system, and over the last few months Selma City Council members have been trying to find a way to fix the issue.

“We want that air conditioning fixed because it is supposed to be fixed. Hotels are supposed to have air that works, and it is time,” said councilwoman Angela Benjamin. “It is old, and we need to get that clunker out. It is time to put the new stuff in.”

According to hotel manager Annette Jones, two central air conditioning units were soon to be installed at the hotel Wednesday afternoon.

“We got two units set on the building [Wednesday], so our air conditioning problem is really solved,” Jones said. “Once they come in and hook it up, we’re good.”

Jones said she expects the system to be fully functioning within the next few days. Fancher Fabrications Inc., who set the units, wasn’t able to finish installing the system Wednesday due to rain.

Jones said the problem has mainly been in the hotel’s two ballrooms rather than guest rooms.

The city owns the hotel and recently took over the management of it in March after Strand Development asked to be released from its contract.

Benjamin said it was important to get the system fixed because it makes the stay there more comfortable for customers, and it is something they should expect when they rent a room or come to the restaurant.

Even with air conditioning problems, Benjamin said the hotel has stayed busy since the city took over the management of it.

“The new system is going to benefit us very, very well because once people walk in and they can feel the coolness, they will know they are okay,” Jones said.

The new system cost around $38,000. Plans were put into action to fix the hotel’s air conditioning problems at a city council meeting in May.