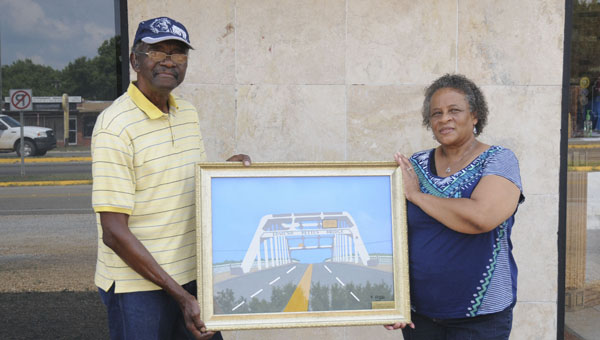 Vernon Spicer and Pearlie Walker pose for a photo outside the National Voting Rights Museum. Spicer donated a spaghetti portrait of the Edmund Pettus Bridge to the museum. –Tyra Jackson

One local artist donated an unusual piece of art to the National Voting Rights Museum Tuesday that is made of materials some might devour at their dinner tables.

Spaghetti art is what Vernon Spicer said he does best. His latest creation of the Edmund Pettus Bridge will be hung for all to view at the museum. Museum director Pearlie Walker was fascinated by the painting, which incorporates different types of spaghetti and other dinner items.

“It will remain in the museum for as long as I am here,” she said. “I would like to thank him for showing an interest in the museum. The bridge is a symbol that our museum tries to get out to other people.”

The spaghetti pieces are not unfamiliar to the museum. In fact, some of his older works hung in the old location of the museum on Water Avenue. Walker said his works would be the first thing anyone laid eyes on, when they entered the museum.

Almost every form of spaghetti on a menu is on the portrait. Fettuccine, linguini, angel hair, lasagna and regular thin spaghetti compose the piece.

The road on the side of the portrait is made of sand, and the trees and shrubbery are formed from parsley flakes. All together, this is one of Spicer’s favorite artworks, he said.

“It’s one of my favorite paintings,” Spicer said. “When I started doing it in 2005 that’s the first picture I made a bridge picture. I relax when I do my spaghetti art. I just forget about the outside world.”

Historic landmarks are not the only crafted pieces he can compose from pasta.

In fact, he’s painted wildlife and country scenes, houses and much more. So far, he said he has produced about 60 portraits.  Donating his favored bridge painting was a win-win for the artist. He said he gets to exhibit his work and work toward the betterment of the museum.

“I think people all over the United States and the world come through here because it’s a historic city,” he said. “I think they really need to see some unusual art.”