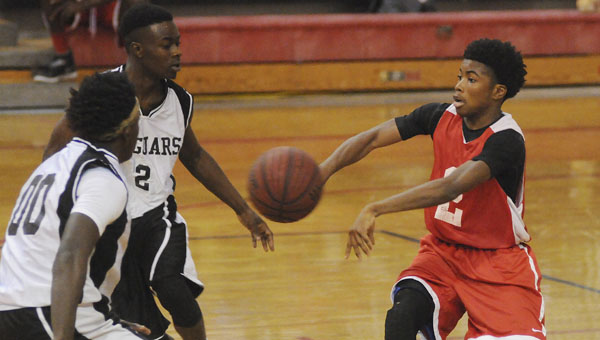 Southside’s Kendell Lewis tries to throw a pass between two Sumter Central players during Tuesday’s playdate at Southside High School. The Panthers lost to the Jaguars 49-37 but won their next two games.–Daniel Evans

Southside head coach Cedric Brown said he can already see a difference from where his team was at the beginning of the summer and where they were Tuesday at the Panthers’ annual playdate at Southside High School.

The difference is easy to see on the scoreboard too. After falling in some close games at Selma High School in their opening playdate of the summer, Southside played many of their opponents tight in a slate of games at UAB Saturday and also won two games Tuesday.

“The more games we play the better we are looking and today I am getting a lot of the young kids involved that won’t be on varsity but they’ll be playing JV. I’m trying to get them involved and let them play on a varsity level.”

The Panthers turned a close game with Ellwood Christian into a 20-point win to end their day. Southside also defeated Autaugaville 44-40 and fell to Sumter Central 49-37 on Tuesday.

In the loss to Sumter Central, Brown said not having a point guard really hurt the Panthers.  During the first half, the Panthers turned the ball over numerous times against the Jaguars’ press.

The Panthers have other areas of concern too. Brown said his team has got to continue working on team chemistry so that the offense runs smoother and the defense can set up where it needs to be.

“To me, we are struggling right now because we aren’t in position like I think we should be,” he said.