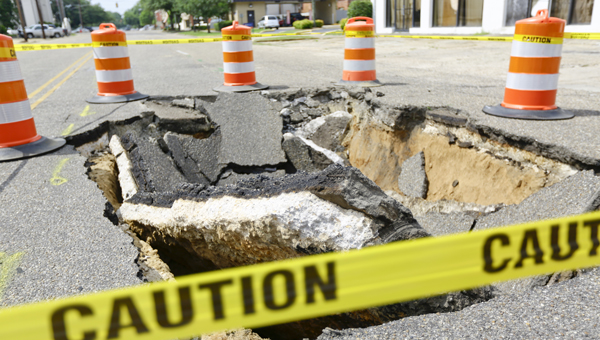 A large sinkhole formed Monday night or Tuesday morning on Lauderdale Street, due to a century old clay pipe for storm water collapsed. The road is caved in the hole is surrounded by road cones and caution tape.–Alaina Denean Deshazo

People that drive down Lauderdale Street and Water Avenue have become quite familiar with weaving in and out of traffic cones to get around sinkholes the last few months.

That problem doesn’t seem like it is going away anytime soon after another sinkhole formed on Lauderdale Street.

“It happened sometime [Monday] night or early [Tuesday] morning,” said Ray Hogg, the city’s engineering consultant. “I got a call from Tommy Smith at Public Works about 7:30 a.m., and I met him down there.”

The Selma Police Department blocked off the northbound lane of Lauderdale next to Selma One Hour Cleaners and reopened the intersection of Water and Church, which was blocked off due to a sinkhole on the bank of the Alabama River.

Hogg estimates the hole to be around 10 feet wide and close to 20 feet long. The new hole is about 100 feet from a spot in the road that caved in at the Bienville Park in March.

“It is the same pipe that runs down Lauderdale Street. It starts there at the Bienville monument and runs north up Lauderdale to Alabama and then to Selma Avenue,” Hogg said.

According to Hogg, a century old vitrified clay pipe for storm water collapsed, causing the road to cave in. While the hole is new, Hogg said the problem with the pipe that caused the collapse is not.

“It’s part of the same pipe system that we’ve already repaired last year,” Hogg said. “The pipe is just not in very good shape. I can’t say it any other way. It’s just brittle.”

The city has had problems with the pipe that date back to December 2013, when a sinkhole formed in Bienville Park.

The problem continued when sinkholes formed near the intersection of Alabama Avenue and Lauderdale Street and in front of the Dallas County Courthouse.

The city had repairs made to the existing pipe that seemed to be holding up until recently when holes formed at Bienville Park and the cleaners.

Hogg said he is going to suggest replacing the pipe this time instead of repairing it.

“The entire pipe from Water Avenue probably all the way to Selma Avenue needs to be replaced,” Hogg said.

“When you repair a section, the problem just moves to another spot. That is obvious with the two that we fixed last fall there at Land Speir Company and there at the courthouse.”

Hogg said he hopes to have a plan drawn up by the city council next meeting so they can get the problem fixed as soon as possible.

“As we got closer to Selma Avenue, the condition of the pipe got a little bit better, but the section between Water Avenue and Alabama Avenue is just old and brittle pipe,” Hogg said.

The sinkhole at the corner of Church Street and Water Avenue has been stabilized for now, and Hogg is in the process of drawing up plans to fix the issue.

“[The council] told me to go ahead and get started on making plans for it, and that is what we’re doing now,” Hogg said.

“Hopefully, next week or so we’ll get some bids, and by the time of the next work session I’ll hopefully have some prices.”