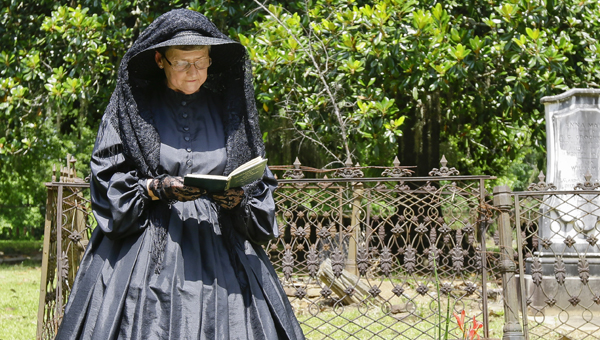 Anne Dalton reads during a ceremony for Mary Louisa Portis, a newborn baby born in 1853 whose stolen headstone was returned to Old Cahawba Saturday.–Alaina Denean Deshazo

A crowd gathered Saturday at Old Cahawba Archaeological Park to pay respects to Mary Louisa Portis, a newborn baby that died in 1853.

Portis’ headstone was stolen from the park many years ago, but research by genealogists allowed it to be returned to its original resting place.

“It was an honor to me to finally put this baby’s stone back where it belongs,” said Phyllis Armstrong, a volunteer genealogist with the Alabama Historical Commission.

“It feels good to my heart. Being a child at 4-years-old I lost my mom, so I know how dear a cemetery is, and it just touched my heart.”

Armstrong was one of a group of people who spent hours cleaning up Lincoln Cemetery in Montgomery, where the headstone was found.

According to Linda Derry, site director at Old Cahawba Archaeological Park, LeeAnne Wofford, who works with the Alabama Historical Commission, initially pointed out the headstone.

The headstone dates back to 1853, making it obvious that it did not belong in a cemetery that was founded in 1907.

When the headstone was found, the volunteers researched where it really belonged.

Derry said she believes the stone was stolen by vandals in the 1960s.

Armstrong and Wofford, along with several other volunteers, made their way out to Old Cahawba Saturday to deliver the stone and participate in the ceremony.

“It brings tears to my eyes to see this stone recovered and brought back where it belongs. It’s a wonderful day to me,” Armstrong said. “It’s more than any honor I get from anything else … is to see this baby’s stone replaced. We worked on Lincoln [cemetery] many many hours cleaning it, and to find out where it goes, and to bring it back … it’s just great.”

Derry said the ceremony was touching, and a great ending to the search for the stone.

“The ceremony just really touched my heart. It was absolutely wonderful,” Derry said.