A 31-year-old Selma woman was arrested Thursday for allegedly stabbing her boyfriend multiple times after the couple got into a fight. 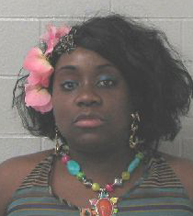 Monica Riddle was charged with first-degree domestic violence, which is a Class B felony and punishable by up to 20 years in prison and $30,000 in fines.

According to Lt. Curtis Muhannad with the Selma Police Department, Riddle stabbed her 41-year-old boyfriend after the couple’s verbal argument turned into a physical altercation.

Muhannad said officers responded to the 2700 block of Annie Cooper Avenue in reference to a call about a stab victim.

“When officers arrived on scene they found a black male, age 41, who had been severely stabbed and in critical condition,” Muhannad said.

According to Muhannad, officers provided immediate medical attention to the victim until he could be transported to the emergency room. He was later airlifted to a hospital in the Montgomery County area for further treatment.

Riddle was detained at the scene, according to Muhannad.

“A witness to the stabbing reported that the couple got into a verbal altercation, which led to a physical altercation,” Muhannad said.

According to Muhannad, a knife was brought into the fight. Investigators are still trying to determine whether Riddle or her boyfriend introduced the knife into the fight.

“Both parties struggled for [the knife], but Ms. Riddle was able to gain control over the weapon and stabbed the victim several times with it,” Muhannad said.

According to Muhannad, the couple has a history of domestic violence.

Muhannad said the victim is currently in stable condition.